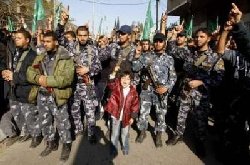 The survivors of the Israeli offensive in Gaza have slowly begun to restore a semblance of normalcy to their daily lives.

Public facilities are operating once again, the streets are being cleared, tractors are at work removing piles of rubble, power lines are being fixed and electricity and water services are being restored to homes in Gaza.
Government employees went back to work on January 21 and arrangements are being made for those whose offices have been destroyed.
Palestinian ministries are recommencing their work despite the destruction of some of their facilities.
Schools reopened on January 24 but many classes were overcrowded as they attempted to accommodate students from buildings which had been destroyed by Israeli air raids.
Meanwhile, the police have pledged to return to the streets in full uniform in a matter of days.
Caution
However, the return to a sense of normalcy in Gaza, despite the siege and threat of renewed Israeli attacks, has been slow in coming.
In the first 24 hours following the Israeli announcement of a unilateral ceasefire many Gazans exercised caution and did not venture out.
Those who did leave their homes, headed to the nearest store or moved from one home to another in order to reunite with their families; the majority stayed put and decided to wait.
The city looked and felt deserted. It was not until the next day that people began to slowly emerge and examine their immediate surroundings.
Residents of neighborhoods that were occupied by Israeli forces during the ground offensive feared returning to their apartment buildings and houses in case the ceasefire failed to hold.
They only visited their homes in the daytime to survey the extent of the damage.
Garbage and debris
It was no small shock to see the state of destruction leveled on Gaza City. The streets were filled with garbage, rubble and debris. Pavements seemed like they had been pulled out of the ground.
The roads were strewn with overturned cars, fallen lampposts, trees, windows and bricks that had been blown out of homes.
Driving through the city centre, where several government buildings had once been, was like driving through a junkyard. Every street, every alley, every corner bears evidence of mayhem and upheaval.
While the central areas of Gaza City were badly affected, the scale of the destruction in the outlying areas and towns is incomparable.
Beit Lahya a town with orange and olive groves, factories and residential areas was laid waste.
You could not walk more than a few meters without passing a home, school, warehouse, public service building or mosque that had been flattened. In some parts of the town, entire clusters of houses had been demolished.
Other houses which were left still standing are now uninhabitable because they had their windows blown by shrapnel and artillery shells which fell nearby.
The orange groves were not spared the destruction; tens of trees had been uprooted and some fields were bulldozed - leaving no trace of local agriculture.
On the mounds
I passed by a group of men sitting on a large mound of rubble and metal, talking and drinking tea.
The mound was all that remained of a steel factory and the owner was among the group of his employees.
"And where else are we supposed to go this morning?" he replied when asked why he was sitting outside in the cold.
He pointed to a number of nearby factories that had met the same fate as his own.
This carnage was repeated in the former industrial districts of Beit Lahya and Jabaliya.
Some families have set up tents by the ruins of their homes. Families with access to a warehouse, store, shack or any other structure that provides shelter from the cold are staying there.
There is no estimate yet of the number of homes that have been destroyed, but tens of thousands of people are still displaced and homeless.
Nowhere to go
Many families chose to remain by their former homes because they have nowhere else to go.
They spend their days digging through the rubble, looking for any items and belongings that may have endured the Israeli attacks.
Displaced homeless families who have been staying with friends and family feel that they cannot burden their relatives any longer.
"At this point we go to my sister's house to sleep at night," one elderly man said.
He sat with his wife, seven children and son-in-law on some wooden planks next to the ruins of their home. They had made a small fire.
"But we spend the whole day here. I can't burden my sister with our expenses and they don't have that much room. UNRWA said that they would distribute tents and blankets.
"When they do we'll set it up here, we're hoping to get one soon," he said.
Another family in Jabaliya had set up their own tent, using the remains of carpets they had pulled out from the rubble and putting them over a few rods that were still standing.
"It gets cold at night, but they made us leave the school and we have nowhere to go," said the mother of six, who was sitting with her husband, children and father-in-law in the small, make-shift shelter they had built.
Day by day
The question of where the displaced families will go, whether in Rafah, Gaza City or further north, remains unanswered.
Many say that they are living day by day, coping with the challenges as they come.
They would rather live in tents all their lives than have to live in constant fear.
The people of the Gaza Strip seem like they are still in the process of regaining consciousness, getting accustomed to the new realities of the aftermath of the Israeli offensive.
Hamas spokesmen and a number of resistance fighters clad in civilian clothing and looking after their families continue to insist that they are stronger for having survived the Israeli attacks.
They are claiming victory.
PHOTO CAPTION
Hamas police officers raise their right fingers while chanting in Arabic "there is only one God and that is Allah" during a demonstration in Gaza City January 20, 2009.
Al-Jazeera