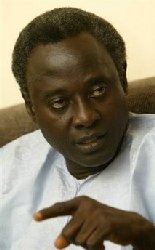 Hundreds of people have been kidnapped in Gambian witch hunts and taken to detention centers where they were forced to drink hallucinogenic concoctions, Amnesty International said.

Eye witnesses and victims told the rights group that those involved in rounding up victims were "accompanied by police army and national intelligence agents," the group said in a statement.
"They are also accompanied by 'green boys' -- Gambian President Yahya Jammeh's personal protection guard," the statement added.
The group said up to 1,000 people had been kidnapped and that the hallucinogenic drinks had caused many to suffer serious kidney problems. At least two people were known to have died.
"I was picked up by these so-called witch-doctors on Thursday 12 March and detained for three days and later released... We were forced to drink concoctions after which most of us hallucinated, urinated and defecated on ourselves," one of the victims told AFP, speaking on condition of anonymity.
Amnesty called on the government to take immediate action and bring those responsible to justice."
It said many villagers were fleeing the countryside for urban areas or neighboring Senegal to escape the round-ups.
The London-based rights group said the witch hunters, allegedly from Guinea, were invited into the country after the death of Jammeh's aunt earlier this year for which he reportedly blamed witchcraft.
According to the organization the recent arrest of Gambian opposition leader Halifa Sallah was also linked to the witch hunts.
Sallah had written about the round-ups for the opposition weekly Foroyaa.
He was arrested on March 8 after visiting a village in Gambia's western region to speak to villagers about the kidnappings.
He faces charges of spying, organizing an unlawful assembly and collecting information that would bring hatred, contempt or incite disaffection on the government of the Gambia. His trial is set for 25 March.
Amnesty warned that Sallah, leader of the main opposition National Alliance for Democracy and Development in the tiny West African state, was at risk of being tortured while in custody.
Gambia, the smallest country on the African mainland, has been ruled by Jammeh since he grabbed power in a bloodless coup in 1994. It has one of the worst human rights records in the West African region.
Jammeh claims to have mystical powers and uses herbs to combat asthma and HIV/AIDS, but campaign groups say the treatment has no scientific basis and that giving it to patients violates their rights.
Before turning his ire on alleged witches the president last year vowed to kill any gays who remained in Gambia.
PHOTO CAPTION
Gambian opposition leader Halifa Sallah.
Source: AFP