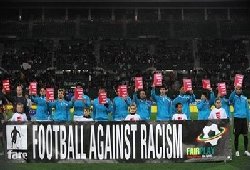 The United Nations is providing cover for Israeli racism say dozens of human rights workers and Fawzi Barhoum, a spokesperson for Hamas.

The United Nations Conference against Racism in Geneva is being boycotted by the US, Israel, Italy, Australia, New Zealand, the Netherlands and Germany. That is “just in case” it deals with Israeli racism.
But the boycotting countries have nothing to fear as the United Nations bent to pressure to ban discussion of Israeli racism. Barhoum said Monday that “it has become quite clear that many countries are using the United Nations to cover up their weaknesses and wrong-doings.”
The Hamas spokesperson told reporters today, “The truth was revealed in the boycott of the United Nations Conference against Racism in Geneva. It was part pressure on leaders and part extortion. A number of other methods were used also to force countries to boycott the anti-racism conference. It exposes the US-backed Zionist entity that uses all methods of killing and destruction against the Palestinian people. Their quest to establish a Jewish state on the ruins of the rights of the Palestinian people requires boycotting anti-racism.”
Barhoum added that the new US President’s boycott of the anti-racism conference also makes clear that his policy has not changed from that of his predecessor when it comes to the Israeli occupation of Palestine.
Hillel Neuer, Director of UN Watch, a pro-Israel group, said, "These UN conferences on racism are intended to attack Western countries, Israel and freedom of expression."
Iranian President Mohammad Ahmadinejad said Israel was the “bearer of racism.”
PHOTO CAPTION
Turkish football team players display anti-racism posters prior a friendly match against Austria, in November 2008, in Vienna.
Source: Agencies