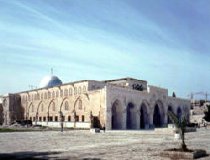 Allah Almighty Says (what means): “Exalted is He who took His Servant by night from Al-Masjid Al-Haraam to Al-Masjid Al-Aqsaa, whose surroundings We have blessed, to show him of Our signs. Indeed, He is the Hearing, the Seeing.” [Quran 17: 1]

Thus says Allah in the Quran of the miracle of the Israa’ and Mi'raaj, or ‘The Night Journey and the Ascension to Heaven’. It was the most magnificent and dangerous trip ever taken by the Prophet

. O Allah! All thanks and praise is unto You for allowing us to be among the followers of this great Prophet, whom You have blessed with this so high a station.
With the Israa’ and Mi'raaj, the Prophet

became the first and only human to cross the barrier between the seen and the unseen. He

then returned to tell us about what he

saw, and what was made obligatory on us. He

returned to confirm the truthfulness of Allah's previous Messages and to tell us of what is going to happen in the distant future, things that would occur on the Last Day and beyond.
And while this miracle represented the first serious trial for the Companions', may Allah be pleased with them, faith in Allah, it has remained until today a test of all believers' faith in Allah and in the Unseen. Allah Says (what means): “…And We did not make the sight which We showed you except as a trial for the people…” [Quran 17: 60] A test that ascertains one's faith. And for those who succeed in it, the Israa’ and Mi'raaj presents an endless source of inspiration and motivation with regard to the religion, this life and the Hereafter.
Israa’ and Mi'raaj as related in Saheeh Muslim
Anas Ibn Maalik, may Allah be pleased with him, reported that the Prophet

said: "I was brought the Buraaq, a long white beast slightly bigger than a donkey but smaller than a mule which, when trotting, would place its next step as far as its eyesight can reach." The Prophet

remarked: 'I returned to my Lord until I felt ashamed before Him.'"
What does it all mean?
Israa’ (Night Journey)
Means betaking the Prophet

back in the same night. Ibn Al-Qayyim

said, "Allah's saying 'took His Servant for a journey by night' and not 'sent His Servant' implies that Allah accompanied the Prophet

. For the letter 'baa' in the Arabic language means besides. And this is why the Prophet

when setting out for a journey would say: "O Allah, You are the Companion during (my) travel."
Mi'raaj (Ascension)
Refers to what happened to the Prophet

ascended from Al-Masjid Al-Aqsaa up to beyond the Seventh Heaven, where the Prayer was prescribed, and then returning back in the same fashion in the same night.
In Al-Bidaayah wa An-Nihaayah, Imaam Ibn Katheer

said, "Ascension didn't take place aboard Al-Buraaq as some people might think, for Al-Buraaq was tied to the door of Bayt Al-Maqdis, so that he

could ride it back to Makkah. The Prophet

ascended from one heaven to another until he passed the Seventh Heaven."
The journey of Israa’ and Mi’raaj – II