A year on, Myanmar cyclone survivors struggle to rebuild 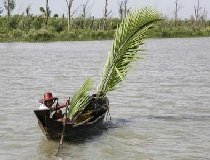 "Everybody lives on food handouts and most of us don't have decent shelter or a job," Ba Thin, 72, said, pointing to the bamboo, thatch and tarpaulin huts lining the road through his village near Bogalay, an area devastated by the May 2-3 storm.
Around Da Nyin Phyu village, where only 100 of its 800 residents survived, paddy fields have yet to fully recover from the 12-foot (4 meter) wall of water surged through the fertile Irrawaddy Delta.
Ba Thin blamed the salinated soil for ruining the main rice crop in the area, leaving farmers with crippling debts.
"Without help, almost all of us will not be able to grow anything in the coming crop season," he said.
With rice yields down nearly a third due to soil salinity and heavy rains affecting the harvest in early April, many farmers will have to sell what rice they have at low prices to try to pay off some of their debts.
"The biggest problem for the people down in these parts is they haven't been able to maintain an income flow," Chris Kaye, country director for the World Food Program (WFP), told Reuters during a recent visit to the delta.
With monsoon rains only weeks away, the main aid coordinating body has issued an urgent appeal for donor funds to help pay for shelter materials and other assistance.
Aid groups estimate at least 500,000 survivors, including 200,000 children, are still living in makeshift shelters cobbled together with bamboo poles and fraying tarpaulin, primarily due to a lack of money.
The pre-monsoon appeal is part of a three-year, $691 million recovery plan drafted by the Tripartite Core Group (TCG), comprising the United Nations, Myanmar and its Southeast Asian neighbors.
The plan faces serious fund-raising hurdles, including a global economic crisis that is squeezing foreign donor governments. Myanmar already receives far less aid than other poor countries due to its dismal human rights record.
Drinking water scarce
Clean drinking water is scarce for most villages in the region, especially those close to the sea.
"We now have to depend on a local NGO or water sellers from the north for our daily drinking water," Tin Aye from Pathee Wai Chaung Village told Reuters.
Fishermen are also struggling, but they grumble more about local corruption than a lack of boats or nets.
Aung Myint said he cannot fish in nearby rivers and creeks because the fishing rights were sold to businessmen in Bogalay.
"We pay through the nose to subcontractors of these businessmen. Sometimes they demand a share of the catch," he said.
After initially resisting a massive foreign aid effort in the delta, the secretive regime relented and allowed foreign aid workers into the country, albeit under tight restrictions.
Aid groups say much has been achieved in the past year and had expressed initial optimism that it could lead to more humanitarian space elsewhere in the country.
But the generals have dashed any hope of that, arresting activists who led private cyclone relief efforts and tightening their grip ahead of scheduled 2010 elections.
The regime said in February it would only extend the TCG's mandate to the middle of 2010, although it was not clear how the decision would affect foreign NGOs operating in the delta.
Mark Canning, the British Ambassador to Myanmar, said he hoped the humanitarian work and access for aid workers would continue, "but we think it's going to be quite constrained in the period coming up to the election."
Western governments led by the United States and Britain have criticized the poll as a sham aimed at entrenching rule by the military, which refused to recognize the last election won in 1990 by Aung San Suu Kyi's National League for Democracy.
Over the years, Washington and London have imposed tough sanctions on the regime, although U.S. Secretary of State Hillary Clinton created a stir in February when she admitted sanctions had not worked and new ways to sway the regime must be found.
Analysts say there is no sign yet the Obama administration's policy review on Myanmar will lead to a lifting of sanctions. In the meantime, Washington has stepped up humanitarian aid, providing $74 million in cyclone assistance.
PHOTO CAPTION
A fisherman uses palm leaves to sail the Pyanmalot River in Pyinsalu Township located in Myanmar's delta region April 28, 2009.
Reuters