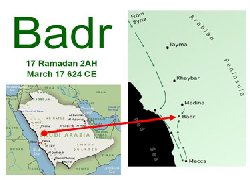 At the beginning of the month of Ramadan, 2 AH, news came to Al-Madeenah that a Makkan caravan was coming from Syria which would pass by Al-Madeenah. In order to instill fear in the disbelievers and also to reply to Kurz ibn Jaabir's attack, the Prophet

(may Allah exalt his mention) asked a party of the Muhajireen (immigrants) and Ansaar (original residents of Al-Madeenah) to intercept the caravan so that the Makkans would know that to worsen the relations with the people of Al-Madeenah might prove injurious to their trading activities with Syria. This party was sent with the sole purpose of frightening them and not for fighting.

The Makkan trade caravan became informed of the movement of the Muslim party. Abu Sufyan, the head of the caravan, and who was a disbeliever at that time led it off the main routes. He also hired Damdam ibn 'Amr Al-Ghifaari to hurry to Makkah with the information that the caravan was facing danger from the Muslims, and they should rush to help it and save their goods. In the wake of this news, Abu Jahl marched forward with great enthusiasm from Makkah at the head of a large army consisting of seven hundred camels and three hundred horses. The entire army was armed to the teeth and the reciters of martial songs also accompanied the army. Al-'Abbaas ibn 'Abdul-Muttalib, 'Utbah ibn Rabee'ah, Umayyah ibn Khalf, Nadar ibn Al-Haarith, Abu Jahl ibn Hishaam and others, a total of thirteen men in all were assigned the duty of serving food to the army. The Muslim party sent to terrorize the trade caravan came back to Al-Madeenah.
The Battle of Badr
Abu Sufyan sent word to Abu Jahl that he had arrived at Makkah and that he should also come back. But Abu Jahl turned down the suggestion. Abu Jahl had, in truth, not come out with the army simply to provide safety but also to avenge the killing of 'Amr ibn Al-Hadrami at the hands of a Muslim party dispatched by the Prophet to Nakhlah to probe some incident.
The Quraysh had already started preparations to retaliate. They were about to invade Al-Madeenah when Damdam ibn 'Amr reached Makkah to seek their help. Abu Jahl was marching towards Al-Madeenah. The Prophet

became aware of the movement of the Quraysh army and all the notable chieftains accompanying the Makkan troops.
The Prophet

summoned his followers and asked for their advice regarding the current development and said to the Companions: "Makkah has sent you its best fighters. What do you think about facing them?" First of all Abu Bakr and then 'Umar ibn Khattaab and Al-Miqdaad, may Allah be pleased with them, uttered words of valor and determination. The last one said: "O Prophet of Allah, we will not say as the Children of Israel said to Moses: 'Go you and your Lord and fight, we will sit here'." The Prophet asked again for their advice. By this he really wanted to know the reaction of the Ansaar for all the three who had pledged their support and loyalty belonged to the Muhajireen. When the Prophet put the same question again, the Ansaar now realized that the question was meant for them.
Their original pledge with him implied their defending him in Al-Madeenah and did not put them under any obligation to take part in a military expedition outside their territory. Sa'd ibn Mu'aath, may Allah be pleased with him, immediately got up to say in reply: "O Prophet of Allah, it seems as if you are addressing to us and you want to have our answer." "Yes," the Prophet

said. Sa'd then said, "We have believed in you and have full faith in your being Allah's Messenger. How can it be possible that Allah's Messenger would go out to fight the disbelievers and we remain sitting in our houses? These disbelievers are, after all, men like us. How can we fear them? If you command us to plunge into the sea, we will do so."
Lack of Means:
Satisfied with the staunch support and determination of the Companions, the Prophet

resolved to march out. The total number of the combatants did not exceed 310 or 312 or 313 according to the different na. When they were finally examined outside the city, some minor children were found accompanying the troops who were not fit to take part in battle yet. Thus the Prophet

asked them to go back. Some of them persistently entreated to be enlisted and of those some were granted permission to accompany the army. It was in no way a well-equipped force. This Islamic army had only two horses under the charge of Az-Zubayr ibn Al-'Awwaam and Al-Miqdaad, may Allah be pleased with them, and seventy camels to be mounted by three or four persons at a time. Many others accompanied on foot. On reaching Badr, the Islamic army noticed that the enemy force had already captured the raised piece of land and pitched their tents on it. The Muslims had to take the low-lying sandy spot. However, the wells of Badr were under the control of the Muslim force. The Prophet

issued orders that any of the disbelievers coming for water must not be prevented. A hut of palm branches was erected for the Prophet

on an elevation overlooking the battlefield. He prayed and invoked the help and blessings of Allah.
The number of the Companions were one-third of the Makkans, and their weapons were less than one-hundredth of what the Quraysh army had. Their army consisted of young and strong men, and all wearing armor. The Muslims were, on the other hand, starving, weak, sick and old. Most of them didn't even possess simple weapons. Some of them had swords but no bows and arrows, while others possessed spears but no swords. When the Muslims encamped, the disbelievers sent 'Umayr ibn Wahb Al-Jumahi as a spy to find out the number of Muslim soldiers. 'Umayr reported that they were not more than 310, having a total cavalry of only two. The height of the disbelievers arrogance may be gauged from the statement of 'Utbah ibn Rabee'ah who scornfully remarked, "Let us go back without a fight," meaning the disgracefully low number of the Muslims was no match for the large and well-equipped army of the Makkans. But Abu Jahl vehemently opposed the proposal expressing his firm determination to exterminate them no matter how few they were.
Beginning of War:
At last, on Ramadan 17, 2 AH, when the two armies came face to face, the Prophet

returned to his small hut and beseeched Allah for Divine help. He entreated the Lord:
"O Allah! If you were to exterminate this small group of Muslims, you will not be worshipped on earth any more."
He then offered two Rak'ah of prayer. Following this, he dozed a little and then came out fresh and smiling from his hut and said with utmost confidence:
"The enemy force will be defeated. They will take to their heels."
The Prophet

had already issued an order not to initiate the fighting. There were approximately eighty Muslims from the Muhajireen and the rest belonged to the Ansaar. Among the Ansaar, sixty-one were from Al-Aws and one hundred and seventy from Al-Khazraj. The ranks on both sides were set in order. The Prophet, sallalahu alayhi wa sallam, was setting the ranks with an arrow in his hand.
In the meantime, in accordance with the Arabian fashion, 'Utbah and Shaybah sons of Rabee'ah and Al-Waleed ibn 'Utbah stepped forward, and in response to their call, three of the Ansaar, 'Awf and Mu'awwidh—the sons of 'Afra' and 'Abdullaah ibn Rawaahah came forward to give them battle. 'Utbah asked, "Who are you?" "We are the Ansaar," they answered. "We have fight with you," 'Utbah said in a tone filled with arrogance. He then called out: "O Muhammad; send our peers, men of our own tribe." The Prophet

said, "Go ahead, O Hamzah ibn 'Abdul-Muttalib to give battle to 'Utbah, 'Ubaydah ibn Al-Haarith to fight with Shaybah—the brother of 'Utbah, and 'Ali ibn Abu Taalib to engage Al-Waleed—the son of 'Utbah." With the order, all the three Companions, may Allah be pleased with them, rose from their spots and came face to face with their respective rivals. 'Utbah wanted to know their names although he knew them very well. Then hearing their names he said, "Yes, we will fight with you." The confrontation began. Hamzah and 'Ali, may Allah be them, put the father and the son 'Utbah and Al-Waleed to the sword. 'Ubaydah and Shaybah both received injuries in the encounter. 'Ali ibn Abu Taalib and Hamzah did away with the enemy of Islam and brought 'Ubaydah to the Prophet