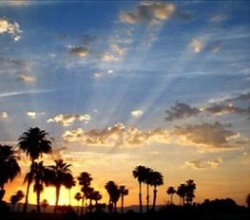 C- The delegation of the Christians of Najraan:

, sent a letter to the rulers of Najraan saying: “I invite you to worship Allah instead of worshipping creatures. I invite you to be allies of Allah instead of being allies of creatures. If you refuse, then you must pay the Jizyah [non Muslim poll tax]; otherwise, I declare war on you. Salaam.” When the bishop of Najraan received the letter, he gathered the people and read it out asking them for their opinion. They decided to send a delegation consisting of fourteen of their nobles (or sixty riders). Three of those held positions of power: Al-‘Aaqib, the person in charge of their political and consultative affairs, As-Sayyid, in charge of their journey, and Abu Al-Haarith, their Bishop and senior scholar.

When they reached Madeenah, they went to meet the Prophet,

, while wearing the Habrah garments (which are made of fine silk embroidered with crosses) and gold rings.

First, they began performing prayer in the mosque towards the East, but the Prophet,

commanded his Companions to leave them.

Then, they came to the Prophet,

, and greeted him, but he ignored them and refused to talk with them. They asked ‘Uthmaan bin ‘Affaan, may Allah be pleased with him, about why they were being ignored by the Prophet,

, and he told them that it was because of their garments. They returned the following day wearing the clothes of monks and greeted the Prophet,

. He responded and invited them to Islam. They refused and said, “We have been Muslims before you.” Hence, the Prophet,

, responded saying: “You are not Muslims for three reasons; worshipping the cross, eating pork and alleging that Allah The Almighty has a son.” They debated much with the Prophet,

, who recited the Quran and refuted their false beliefs. One of their objections was, “Why do you abuse Jesus by saying that he is a slave of Allah?” The Prophet,

, answered: “Yes, indeed he is a slave of Allah The Almighty, His Messenger and His word which He directed to the virgin Mary.” They were very angry and said, “Have you ever seen a human being who has no father? If you are true, show us a similar example.” Hence, Allah The Almighty revealed the following verse to refute their claim. Allah The Almighty Said (what means): {Indeed, the example of Jesus to Allah is like that of Aadam. He created Him from dust; then He said to him, “Be,” and he was. The truth is from your Lord, so do not be among the doubters.}[Quran 3:59-60]

This was an irrefutable argument in which the strange case was likened to what is even stranger. When the wise debate and good instruction proved to be fruitless, the Prophet,

, invited them to Mubaahalah (where both parties gather and invoke the curse of Allah upon those who lie) in implementation of the commandment of Allah The Almighty, who Says (what means): {Then whoever argues with you about it after [this] knowledge has come to you - say, “Come, let us call our sons and your sons, our women and your women, ourselves and yourselves, then supplicate earnestly [together] and invoke the curse of Allah upon the liars [among us].”}[Quran 3:61]

When the time of the Mubaahalah approached, the Prophet,

, went out taking ‘Ali, Al-Hasan, Al-Husayn and his daughter Faatimah, may Allah be pleased with them, and said: “When I supplicate, say Ameen.” The Najraan delegates consulted each other and feared that this Mubaahalah would lead to their destruction, because they were fully aware that Muhammad,

, was a true Prophet and that destruction is the inevitable fate of any people who face a prophet in a Mubaahalah. Consequently, they refused to challenge him and asked him to demand whatever he wanted to make peace with them. The Prophet,

, concluded peace with them on condition that they would pay two thousand suits of garments, half of them in the month of Safar and the rest in the month of Rajab, to the Muslims.

When they intended to return home, they asked the Prophet,

, to send a trustworthy man with them to receive the money of reconciliation. The Prophet,

, said, “I will send an honest man who is extremely trustworthy with you.” Each of the Companions of the Prophet,

, wished to be him. Then the Prophet,

, said: “Get up, O Abu ‘Ubaydah bin Al-Jarraah.” When he got up, the Messenger of Allah,

, said: “This is Ameen [the trustworthy man] of this [Muslim] Ummah.” [Al-Bukhari]