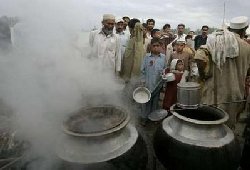 A record number of people were registered as forcibly displaced within their own country during 2008, the UN's refugee agency has said.

Last year, 14.4 million internally displaced persons (IDPs) were registered as living under UN care, compared to 13.7 million the previous year, according to a UNHCR study published on Tuesday.
The annual refugee trends survey states that the total number of IDPs receiving UN assistance by the end of 2008 was "the highest figure on record".
Overall, 42 million people have been forcibly uprooted by conflict and persecution, including 16 million refugees and asylum seekers worldwide and 26 million IDPs.
Of these IDPs, 11.6 million are left to either fend for themselves or receive assistance from other agencies.
While the total number of refugees and internally displaced people fell by 700,000 this year compared to last, renewed fighting in the first few months of 2009 - most notably in Pakistan, Sri Lanka and Somalia - has displaced millions more.
Antonio Guterres, the UN high commissioner for refugees, warned it can take years for refugees and IDPs to return to their homes - if ever.
"While some displacements may be short-lived, others can take years and even decades to resolve. We continue to face several longer-term internal displacement situations in places like Colombia, Iraq, the Democratic Republic of Congo and Somalia.
"Each of these conflicts has also generated refugees who flee beyond their own borders," he said.
The study, "2008 Global Trends: Refugees, asylum seekers, returnees, internally displaced and stateless persons", stressed long-term displacement was of particular concern.
Long-term needs
Peter Kessler, senior external affairs officer for UNHCR, warned that any reduction in funds - something many fear in the current economic climate - would have a devastating effect on humanitarian relief work across the globe.
"Clearly, donors often forget that refugees need primary and secondary education, and even some university education... and advanced medical care.
"Millions of people [displaced] in regions like Iraq, Afghanistan and throughout Africa have durable [long-term] needs and contributions from donors... must likewise remain durable and, indeed, in some cases even rise."
Twenty-nine "protracted refugee situations", where a group of at least 25,000 refugees of the same nationality have been forced to live in exile for five years or more, were identified in the report.
The UN estimates around 5.7 million refugees are trapped in long-term displacements - caused largely by long-running violent conflicts such as those in Afghanistan and Somalia - for whom there is very limited hope of successful repatriation.
A significant fall in repatriation was also noted in the report, with the 2008 figure showing the second-lowest number of returnees for 15 years.
The study also noted developing and least developed countries continue to host the majority of refugees, with 80 per cent of displaced people taking refuge in such nations.
Half the world's refugees reside in camps in sub-Saharan Africa while Pakistan is host to the largest number of refugees worldwide, absorbing 1.8 million refugees, of whom most are Afghans.
Al Jazeera's Hashem Ahelbarra said there are also concerns that while IDPs and refugees languish in camps for longer periods of time, some industrialized countries were making it harder for refugees to claim asylum.
"With wealthy nations imposing more and more stringent migration laws to curb the flow of asylum seekers, refugees will have to grapple with disease, poverty and malnutrition, hoping that one day they will be able to go back home," he said.
PHOTO CAPTION
Internally displaced people, who fled a military offensive in the Swat valley region, stand in line for their ration of tea at the UNHCR Sheik Shahzad camp in Mardan district, about 160 km (99 miles) northwest of Pakistan's capital Islamabad, June 15, 2009.
Source: Aljazeera.net