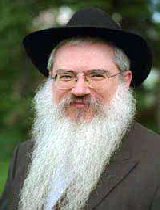 A leading Orthodox American Rabbi caused a huge row when he said the Jewish way of fighting a moral war was to kill civilians and destroys places of worship.

Rabbi Manis Friedman of the Bais Chana Institute of Jewish Studies, Minnesota, was responding to questions by a Jewish American magazine as part of its ‘Ask the Rabbis’ feature, when he said, “The only way to fight a moral war is the Jewish way: Destroy their holy sites. Kill men, women and children (and cattle).” He also dismissed “western” concepts of morality saying, “I don’t believe in western morality, i.e., don’t kill civilians or children, don’t destroy holy sites, don’t fight during holiday seasons, don’t bomb cemeteries, and don’t shoot until they shoot first because it is immoral."
The Editor of Moment, Nadine Epstein, said they had received “many letters and e-mails in response to Rabbi Friedman’s comments and almost none of them have been positive."
Friedman later conceded his words were “irresponsible” and apologized for their misleading presentation, however he also seemed to defend his behavior saying he was only attempting to “briefly address some of the ethical issues related to forcing the military to withhold fire from certain people and places, at the unbearable cost of widespread bloodshed."
Bizarrely, Friedman, who is from the Chabad-Lubavitch, a Hasidic movement in Orthodox Judaism, also argued that "he is different from Arab terrorists who have used similar language about killing Jewish civilians".
"When they say it, its genocide, not self-defense,” Friedman said. “With them, it’s a religious belief - they need to rid the area of us. We’re not saying that."
Ibrahim Hooper, national spokesman of Council on American-Islamic Relations (CAIR), told The Muslim News, “Genocide is genocide, whether it’s during a time of peace or war ... I can only imagine if this were some American Muslim leader espousing similar extremist views."
Hooper said he was shocked not just by Friedman’s views, “but that it would be published in a mainstream publication like Moment. It’s the first time I’ve heard it in this country... There were rabbis (in Israel) handing out similar viewpoints to Israeli soldiers."
CAIR-MN Communications Director, Jessica Zikri, said, “Silence in the face of such extremist views will only serve to give the author a false sense of legitimacy and approval."
In a statement to The Muslim News, Cecilie Surasky of Jewish Voice for Peace, said: “Friedman’s outrageous suggestion that killing Arab men, women and children, and destroying their religious sites is ‘the Jewish way’ is an affront to all people, but especially Jews who value all life equally. While his statement in no way represents the views of the vast majority of Jews, we are alarmed by the increasing numbers of extremist settlers in Israel, and their American supporters, who share his refusal to acknowledge the value of Palestinian and Arab life. Far from bringing peace and security to Jews, this abhorrent disregard for the lives of non-Jews only leads to more bloodshed and war."
PHOTO CAPTION
Manis Friedman, a leading Orthodox American Rabbi
Source: Muslim News