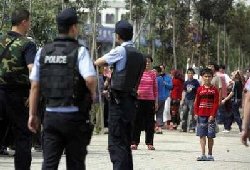 The riots that rocked the city of Urumqi in China's northwestern Xinjiang region are the area's worst for more than a decade.