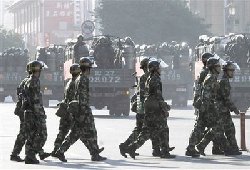 Chinese President Hu Jintao has cut short an official visit to Italy for the G8 summit and is returning home following deadly response to protests of Uighurs in East Turkistan, state media reported.

The government flooded the area with security forces in the wake of deadly response that left 156 dead.
Hu left for home early Wednesday "due to the situation in northwest China's Xinjiang Uighur Autonomous Region" the Xinhua news agency reported.
China changed its name to "Xinjiang" in 1955, calls it "China's Xinjiang Uighur Autonomous Region".
The summit opens later Wednesday in the central Italian town of L'Aquila and although China is not a member of the Group of Eight, much of the talk was to include emerging powers including Beijing.
It was not known if he would travel to Urumqi, about four hours by air west of Beijing.
Hundreds of paramilitary police are on the main roads to Uighur neighborhoods and the city's central square, where the first protests began. Most were armed with shields and clubs, while a few had assault rifles fixed with bayonets.
Thousands of Han Chinese, many of them armed, surged through the capital of East Turkistan on Tuesday looking for Uighur targets.
Chinese police have arrested 1,434 Uighurs over East Turkistan protests, the official Xinhua news agency said on Tuesday, as part of a crackdown.
Han Chinese attacked on Uighur workers in a dormitory of a toy factory in China's southern Guangdong province, killing two people and injuring 118.
After the attack, Chinese police arrested 1,434 Uighurs two days after killing 156 dead and wounding more than 1,000 since Uighurs started the protests in the capital Urumqi.
China imposed an overnight curfew in Urumqi after thousands of Han stormed through its streets to attack Uighurs.
"Arrests, Han attacks"
Uighur residents said night-time arrests were continuing and they were quietly preparing to defend against further Han attacks.
The city was still on edge. In one downtown street two young boys were surrounded by an angry mob, with dozens trying to pull them down and grabbing at their hair.
Han Chinese crowds, swelling by the hour, protested against security forces seizing young Han men.
Rumors swirled. A group of Uighur men said they were convinced two locals died in Tuesday's confrontations and that there were many more deaths across the city.
A man in his 50s, who gave name as Mohammed Ali, said he had heard from neighbors and friends that two men had died and two had been seriously wounded.
"Now we are scared to go anywhere," he said. "Doing even simple things becomes frightening."
Groups of Han gathered around reporters in Urumqi to talk about how angry they were and dragged away a Uighur woman who also approached. It was not clear what happened to her.
The government has blamed Sunday's killings on exiled Uighurs seeking independence for their homeland, especially Rebiya Kadeer, a businesswoman and activist now living in exile in the United States.
Kadeer, writing in the Asian Wall Street Journal on Wednesday, condemned the violence, rejecting accusations.
"Years of Chinese repression of Uighurs topped by a confirmation that Chinese officials have no interest in observing the rule of law when Uighurs are concerned is the cause of the current Uighur discontent," she wrote.
East Turkistan has 8 million Uighurs and historical records show that the Uyghurs have a history of more than 4000 years.
East Turkistan was occupied by the communist China in 1949 and its name was changed in 1955.
Many Uighurs resent Han Chinese rule, complaining they're marginalized economically and politically in their own land, while having to tolerate a rising influx of Han Chinese migrants.
Meanwhile, human rights groups accuse Beijing of using claims of "terrorism" as an excuse to crack down on peaceful pro-independence sentiment and expressions of Uighur identity.
PHOTO CAPTION
Paramilitary police officers make their way through the street of central Urumqi, China, on Thursday July 9, 2009.
Source: Agencies