Anti-Islamic attacks on the rise 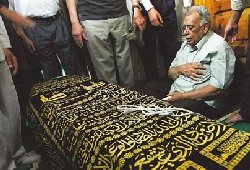 The murder of Marwa Sherbini, a veiled (and pregnant) Egyptian woman, as she prepared to give evidence in a German courtroom against a man who physically assaulted her, has incensed the Muslim World and re-ignited the debate over whether Europe is a truly tolerant society or one on the cusp of xenophobic extremism.

Muslims say the attitudes which prevailed in early 20th century European history and gave rise to the Holocaust are similar in nature to the climate of intimidation and violence Muslim communities must increasingly endure in contemporary Europe.
Today, Muslims in Europe are seen as existing outside of a democratic culture. A resurgence of social Darwinism as applied to libertarian theory--that democratic ideals are inherently superior to ideals of other cultures--has alienated Muslims and created a cultural backlash against them.
A hostile view of Islam began in the 8th century when Muslims expanded into the Iberian Peninsula. Islam was rejected as a fundamental religion and seen as a direct challenge to Christianity; Muslims were seen as heretics and the noble Prophet Muhammad "a diabolical fraud".
With Muslims' increased migration to Europe, fear of an Eastern culture in the midst of Western ideals dominated the discourse.
Soumayya Ghannoushi, a researcher in the history of ideas at the School of Oriental and African Studies at the University of London, believes:
"The medieval Christian view of Islam as a deviant, violent, licentious and heretical creed was secularized, stripped of its transcendental character and rearticulated within a modern essentialist philosophy that continues to define the terms of Western discourse on Islam, in its mainstream at least."
In 1997, the London-based Runnymede Charity published a report entitled "Islamophobia: A Challenge for Us All."
Updated in 2004, it found that Muslims were seen as the "other" and as "lacking in values" held by Western cultures. Islam was also seen as "violent, aggressive, terroristic and inferior" to Western "ideals".
More importantly, hostility towards Islam is used to justify discriminatory practices towards Muslims and their exclusion from mainstream society, the report found.
In a final note of caution, the report also found that among Europeans anti-Muslim hostility is seen as natural or normal.
Such findings help explain why cartoons depicting the noble Prophet Muhammad published in the Danish Jyllands-Posten newspaper in 2006 should not be seen as experiments in journalistic freedoms; the cartoons were not borne in a vacuum.
Given the racism many Muslims endure in Europe, the murder of an Egyptian woman because she wore a Hijab should not be dismissed as the act of a lone man who many are now calling insane.
Her murder comes amid increased media coverage of Muslims as outsiders unable to conform to Western ideologies, a growing anti-immigrant backlash in Europe, the resurgence of right-wing extremist groups even within the political establishments, and the decline in continental economic dividends. These must be seen as mutually inclusive.
While many countries around the world have enacted anti-hate speech laws and legislature to combat anti-Semitism, there is still no international consensus that equates Islamophobia with racism.
In its 2004 annual report, the European Commission against Racism and Intolerance (ECRI) found that:
"Islamophobia continues to manifest itself in different guises. Muslim communities are the target of negative attitudes, and sometimes, violence and harassment. They suffer multiple forms of discrimination, including sometimes from certain public institutions. ECRI is worried about the current climate of hostility against persons who are or are believed to be Muslim."
There is, indeed, a cultural divide as ECRI points out:
"One of the new faces of racism today is "cultural" racism. According to this notion of racism, cultures are pre-defined entities, largely seen as homogenous, unchangeable and, more importantly, incompatible with each other."
Sherbini's death must not be in vain. It must now be reiterated that Muslim and non-Muslim leaders carefully face the great cultural gap that divides them - and breach it.
Muslim leaders must continue to emphasize the guiding principles of their faith - justice, tolerance, charity, compassion and equality.
European leaders must immediately condemn Sherbini's murder, hold her killer accountable, and acknowledge that Islamophobia is a growing threat.
Otherwise, Europe is precariously close to repeating the horrors of the past.
PHOTO CAPTION
The father of Marwa Sherbini, an Egyptian woman stabbed to death in a courtroom in Dresden, Germany, on July 1, prays next to her casket in the Ibrahim Mosque in Alexandria on Monday.
Source: Agencies