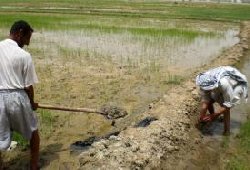 Once the cradle of agriculture for civilization, the Land Between Two Rivers - the Tigris and Euphrates - has become a basket case for its farmers.