The Hijrah of the Prophet, sallallaahu ‘alayhi wa sallam. 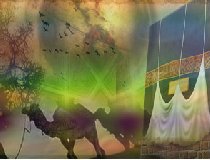 The Hijrah – emigration of the Prophet,

, to Madeenah – constitutes a wonderful memory honored by many annually. But, it is only the wise who recognize its full magnanimity: as a victory for the believers and their escape from a life of injustice and subjugation to a free and respectable one. It marked a new phase in the struggle between Islam and disbelief, and between truth and falsehood, hence only fit to signify the start of the Muslim calendar.

And for us to appreciate it so, we must go back in history more than ten centuries, to the thirteenth year after Muhammad,

, was given the mission of Prophethood. It was a time when Muslims were permitted to leave Makkah and escape persecution; many succeeded, managing to overcome the obstacles put in their way by Quraysh, to hinder them from reaching Yathrib (the former name of Madeenah). When they arrived, they found their brothers from the Ansaar (their supporters among the locals) welcoming them warmly, opening up their hearts and homes to them. That greatly boosted their morale, so much so that only a few believers remained in Makkah, and only because they were oppressed or captured.
Sensing their vulnerability, the Quraysh believed the situation could only be restored if they managed to prevent the emigration of the Prophet,

, by any means possible.
As a result, conspirators secretly agreed to eliminate him,

, before he was able to leave for refuge in Madeenah. On a Thursday of the month of Safar, the disbelievers assembled at Daar -un-Nadwah to decide on the best course of action. One suggestion expressed the necessity of killing the Prophet,

, while others advocated either imprisonment or exile.
However, the consensus was to murder him in a manner that the tribe of the Prophet,

, Banu Haashim, could not retaliate. Their strategy was to handpick the best young man from all the tribes of Quraysh and order them to strike the Prophet,

, simultaneously with their swords, so that every clan would be culpable for the crime. Clearly, Banu Haashim could not engage them all in battle and would be obliged to only accept blood money as settlement. Allah The Almighty mentions this, Saying (what means): {And [remember, O Muhammad], when those who disbelieved plotted against you to restrain you or kill you or evict you [from Makkah]. But they plan, and Allah plans. And Allah is the best of planners.} [Quran 8:30]
The Quraysh, however, were unaware that Allah The Almighty had already given permission for the Prophet,

, to emigrate; so, while they were still weaving their plots, he was preparing to travel to Madeenah. While disguised as a necessary precaution, he,

, went to the house of Abu Bakr, may Allah be pleased with him, unusually at the noon, to inform him of the order to depart Makkah imminently.
Fearing that he would not be blessed to accompany the Prophet,

sought permission to travel with him and was granted it. He

shed tears of joy; he hired a non-Muslim man from Banu Ad-Dayl, called ‘Abdullah ibn Urayqit, to take care of two camels he had preemptively readied for the journey and bring them to him three nights later at the Thawr cave. His daughters, ‘Aa'ishah and Asmaa̓

prepared all the necessary gear and supplies, and put food in a container. Asmaa̔

would later be known as “the one with two waistbands”, as she would tear her waistband in half, tying a bundle of food on one end and a water skin container on the another, to take to the two travelers.
Then, the awaited moment arrived and the Prophet,

set out to leave through the backdoor of the house. Before that, he,

to stay behind in order to return to people possessions they had entrusted to him. He,

, also told the young man to lie down in his bed, wearing his clothes, in order to stymie Quraysh.
Hence, the Prophet,

succeeded in evading the disbelievers, who did not even notice they had left until the following morning, when ‘Ali ibn Taalib

emerged from the house. Enraged, they surrounded him, asking him about the Prophet,

, but he pretended to be astonished and unaware of his whereabouts.
Knowing that Abu Bakr, may Allah be pleased with him, was the confidante of the Prophet,

, they rushed to his house to extract information, only to find he had left, too. They questioned Asmaa̓

about her father, but she feigned ignorance. So, Abu Jahl, one of the chiefs of Quraysh, became enraged and slapped her face, cutting her ear with her earring in the process.
Having been stonewalled, the Quraysh exerted all their efforts to hunt down the two men, placing everyone in Makkah under close surveillance and announcing a valuable prize for anyone who caught the Prophet,

, dead or alive. They commissioned experts in tracking and rushed north in the hope of finding any trail of the Prophet,

, had already outdone them, by having cleverly taken an unfamiliar and indirect route to Madeenah. He,

, headed south, threading through rugged mountains till he reached an inaccessible cave called Thawr, where he stayed with Abu Bakr

until the hunt simmered down.
However, a massive manhunt led the Quraysh to that very cave and they drew quite near to its entrance, so much so that Abu Bakr

could hear their footsteps; so, he whispered to the Prophet,

: "What if they were to look through the crevice and spot us?" Filled with trust and confidence in the promise of Allah The Almighty (to protect him and His Message), the Prophet,

, calmly replied: "Abu Bakr! What do you think [can happen to] two with whom the Third is Allah?"
Needless to say, the firm belief of the Prophet,

, in Allah The Almighty was verified; the Quraysh ruled out the possibility of them being anywhere near that place and left without having achieved any success.
On to Madeenah
The Prophet,

, stayed three nights in the cave of Thawr, during which he received daily reports of the non-believers in Makkah, from ‘Abdullaah ibn Abi Bakr

. Another man, ‘Aamir ibn Fuhayrah, would hide his trail when he would bring sheep, so the Prophet,

could drink some milk. Then, at the appointed time, ‘Abdullaah ibn ̓Urayqit brought the camels, as per the agreement.
On a Monday night in the month of Rabee‘ul-Awwal, the Prophet,

headed to Madeenah, taking the coastal route. They rode all day long, and Abu Bakr

rode with the Prophet,

, beside, in front and behind him, shielding him continuously, fearing the Quraysh would attack. At noon, they stopped to rest, taking shelter behind a huge rock. Abu Bakr

evened the place out for the Prophet,

, to lie down. In the meantime, a shepherd, driving his herd, seemed to be heading their way; when he came closer, Abu Bakr

asked: "Who is your master?" The slave boy replied: "I am a slave of a master from Makkah." He inquired: "Do your sheep have milk?" The boy answered in the affirmative, so Abu Bakr

milked some for the Prophet,

, who was able to quench his thirst.
However, danger lurked, as a disbeliever had caught a glimpse of the Prophet,

, from afar. He hastened to Makkah and told people of two figures he spotted riding on their camels, along the coast. One man, Suraaqah ibn Maalik, realized he was right to assume they must have been Muhammad,

, and his Companion, but convinced the informant otherwise, so he could claim the prize money for himself. He stayed for an hour, then sneaked away, so he would not call the attention of anyone. He took his spear and rushed on his horse to where he thought the Prophet

were.
But, when he drew close, his horse stumbled and he fell to the ground. He briefly considered it an ill omen, before mounting his ride again and rushing forward, only for his horse to trip once more. Suraaqah became apprehensive, but his desire for the prize money made him overlook his reservations. But, when he came closer to the Prophet,

, his horse's hooves sank into the sand until it came to its knees and smoke rose from between them; that is when he realized that the men he was pursuing were being protected by Allah The Almighty. Therefore, he asked them for security (fearing Muslims would take revenge for his action), promising not to divulge their whereabouts. The Prophet,

, wrote him a note, granting him that and Suraaqah, on his part, fulfilled his promise and diverted any other person in pursuit of the Prophet,

, to look elsewhere, concealing his location, until he safely approached Madeenah.
On their way, the Prophet,

also stopped at the tent of Umm Ma‘bad and asked her for some food. She, however, had nothing to offer, but a dry boney goat. So, the Prophet,

, took it, touched its udders, invoked the blessings of Allah The Almighty and miraculously milked it. And, as they all drank from the milk, this remarkable incident led Umm Ma‘bad and her husband to embrace Islam.
For all its difficulties, the journey finally came to a good end, with the Prophet,

, reaching Madeenah safely, where he was received by the many Companions

who had previously emigrated from Makkah and by his Muslim brothers who were hosting him in their city.