The Story of Prophet Salih – I 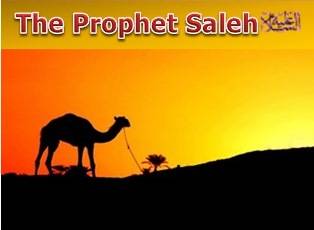 After the destruction of 'Aad, the people of Prophet Houd

Thamood, the people of Prophet Salih

succeeded them in power and glory. They, like their predecessors, fell to idol-worshipping. As their material wealth increased so, too, did their evil ways, while their virtue decreased. Like the people of 'Aad, they erected huge buildings on the plains and hewed beautiful homes out of the hills. Tyranny and oppression became prevalent as evil men ruled the land.

Allah, the Exalted, sent unto them His Prophet Salih

). He called his people to worship Allah alone, and not to associate any partners with Him. While some of them believed him, the majority of them disbelieved and harmed him by both words and deeds. Allah Said in the Quran (what means): "And to Thamood [We sent] their brother Salih. He said, 'O my people, worship Allah; you have no deity other than Him...'" [Quran 11:61]
Prophet Salih

was known for his wisdom, purity and goodness and had been greatly respected by his people before Allah's revelation came to him. Almighty Allah mentions what his people said to him in the Quranic verses (which mean): "O Salih, you were among us a man of promise before this. Do you forbid us to worship what our fathers worshipped? And indeed we are, about that to which you invite us, in disquieting doubt." [Quran 11:62]
They merely wanted to worship the same gods as their fathers had, with no reason, no proof, and no thought. The proof of Prophet Salih's message was evident, but despite this, it was obvious that most of his people did not believe him. They doubted his words, thinking he was charmed, and they saw that he would not stop preaching. Fearing that his followers would increase in number, they tried to put him off by assigning him an important task; to prove that he was a messenger of Allah by performing a miracle. They asked him to let a unique she-camel emerge from the mountains.
Allah Almighty granted Prophet Salih

this miracle and a huge, unique she-camel appeared from the direction of the mountain. The Quranic commentators said that the people of Thamood gathered on a certain day at their meeting place, and prophet Salih

came and addressed them to believe in Allah, reminding them of the favors Allah had granted them.
Then, pointing at a rock, they demanded: "Ask your Lord to make a she-camel, which must be 10 months pregnant, tall and attractive, issue from the rock for us." Prophet Salih

replied: "Look now! If Allah sends you what you have requested, just as you have described, will you believe in that which I have come to you with and have faith in the message I have been sent with?" They answered: "Yes." So he took a vow from them on this, and then prayed to Allah, The Almighty, to grant their request. Allah ordered the distant rock to split asunder, to bring forth a great ten-month pregnant she-camel. When their eyes set on it, they were amazed. They saw a great thing, a wonderful sight, a dazzling power and clear evidence!
A number of Prophet Salih's people believed, yet most of them continued in their disbelief, stubbornness, and going astray. Allah, the Almighty, said in the Noble Quran (what means): "And We gave Thamood the she-camel as a visible sign, but they wronged her." [Quran 17:59] And (what means): "And certainly did the companions of al-Hijr (628) [i.e. the Thamood] deny the messengers." [Quran 15:80-81]
There are a number of accounts by Quranic commentators of this she-camel and its miraculous nature. It was said that the she-camel was miraculous because a rock in the mountain split open and it came forth from it, followed by its young offspring. Other accounts said that the she-camel used to drink all the water in the wells in one day, and no other animals could approach the water. Still others claimed that the she-camel produced milk sufficient for all the people to drink, on the same day that it drank all the water, leaving none for them.
At first, the people of Thamood were greatly surprised when the she-camel emerged from the mountain rocks. It was a blessed beast, and its milk sufficient for thousands of men, women and children. If it slept in a place that place was abandoned by other animals. Thus it was obvious that is was not an ordinary she-camel, but one of Allah's signs.
Their hatred of Prophet Salih

turned towards the blessed she-camel and became centered on it. A conspiracy started to be hatched against the miraculous beast by the disbelievers, and they secretly plotted against it.
Prophet Salih feared that they might kill her, so he warned them saying (what means): "And O my people, this is the she-camel of Allah — [she is] to you a sign. So let her feed upon Allah’s earth and do not touch her with harm, or you will be taken by an impending punishment.” [Quran 11:64]
For a while, Prophet Salih's people let the camel graze and drink freely, but in their hearts they hated it. However, the miraculous appearance of the unique she-camel caused many to become his followers, and they clung to their belief in Allah.
The disbelievers now began complaining that this huge she-camel with its unusual qualities drank most of the water and frightened their cattle.
They laid a plot to kill the beast, and sought the help of their women folk to tempt the men to carry out their commands. A lady named Saduq Bint Mahya, who was from a rich and noble family, offered herself to a young man named Masrai Ibn Mahraj on condition that he hamstrings the she-camel. Aneezah, an old woman, offered one of her daughters to a young man, Qudar Ibn Saluf, in return for killing the she-camel. Naturally, these young men were tempted and set about finding seven others to assist them.
To be continued   The story of Prophet Salih – II