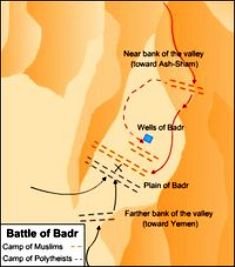 Having gathered precise information about the Qurayshi forces, the Messenger of Allah

Here, Al-Hubaab bin Al-Munthir, may Allah be pleased with him, stood up and said, “O Messenger of Allah, concerning this place: is this the place that Allah has ordered you to be in? If it is as such, then of course we should not advance beyond it or stop before it, or is this a question of opinion, warfare tactics and planning?” The Messenger of Allah

told him that it was a matter of opinion, warfare tactics and planning. Thereupon, Al-Hubaab, may Allah be pleased with him, replied, “O Messenger of Allah, this is then not the correct place [to camp]. You should lead the people until you reach the part of water that is nearest to the people [the polytheists], camp there, destroy the wells beyond it and then construct a basin, fill it with water and then fight them. In this way, we will have plenty of water to drink, while they will have nothing.” The Messenger of Allah

accepted his opinion and then led the army to the part of water that was nearest to the enemy, camped therein, constructed a basin and destroyed the other wells.
This situation portrays an image from the life of the Messenger of Allah

with his Companions. Each individual of that community was free to give his opinion, even concerning the most critical of issues. He would do so without fearing the anger of the commander-in-chief and then the consequences of his anger - whether by undermining the person who gave the contradicting opinion, decreasing him in degree or subjecting him and his wealth to harm.
This freedom on which the Messenger of Allah

nurtured his Companions enabled their community to utilize the mentalities of all those who enjoyed sound opinion and wise rationale. The leader among them, even if he was young, achieved brilliant success because he did not think independently from the Muslims' general interest or according to the opinion of a dominating group, which might look only after its own interests. Rather, he considered all the opinions of his soldiers. He might have received the soundest opinion from the least reputable person among his soldiers and the farthest in position to him.
There were no barriers to prevent any person from freely giving his opinion to the leader of the army.
We also observe the greatness of the prophetic nurturing, which was deeply instilled in the personality of Al-Hubaab bin Al-Munthir, may Allah be pleased with him. It made him polite in front of the Messenger of Allah

and encouraged him to express his opinion, even though he was not asked to do so, and offer his plan. However, this came after the great question that he delivered to the Messenger of Allah

“O Messenger of Allah, concerning this place: is this the place that Allah has ordered you to be in? If it is as such, then of course we should not advance beyond it or stop before it, or is this a question of opinion, warfare tactics and planning?”
This question indicates the greatness of that unique leading personality whose followers knew where and when to talk in front of their leader. If the place was chosen upon revelation, it was better for him that his neck would be cut off than to utter even a word, and if it was chosen based upon human reasoning, then he had a new and complete plan with a new strategy.
This sublime personality knew the principles of consultation as well as the principles of giving one's opinion. Meanwhile, it realized the concept of hearing and obedience, discussion as well as the concept of giving an opinion if it contradicted that of the master of all humans

.
The greatness of the prophetic leadership appeared in listening to the new plan and adopting it, despite the fact that it came from another one of the soldiers or the leaders.