Jurisprudential Rulings Derived from the Treaty of Al-Hudaybiyah-I 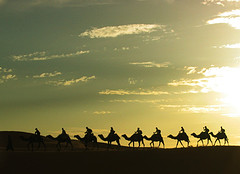 1- The story of Ka‘b bin ‘Ujrah and the revelation of the Verse of Ransom:

It is narrated on the authority of Ka‘b bin ‘Ujrah, may Allah be pleased with him, that he said, “The Messenger of Allah

stood beside me at Al-Hudaybiyah, and lice were falling from my head. He asked me: “Are your lice troubling you?” I replied in the affirmative. The Messenger of Allah,

, said to me: “Shave your head.”Then Allah The Almighty revealed the verse in which He Says (what means): {And whoever among you is ill or has an ailment of the head [making shaving necessary must offer] a ransom of fasting [three days] or charity or sacrifice.}[Quran 2:196]
Ka‘b bin ‘Ujrah, may Allah be pleased with him added, “Then the Prophet,

said: “Fast three days or give in charity a Faraq [about three double handfuls of foodstuff to be distributed] among six poor persons or offer as a sacrifice what is available to you.” [Al-Bukhari] According to the narration of Muslim of this incident, it is reported that the Messenger of Allah,

, stood beside him at Al-Hudaybiyah while he was kindling fire under his cooking pot, and it was before he entered Makkah and while he was in the state of Ihraam (ritual consecration, with lice creeping over his face. He asked him: “Are your lice troubling you?”He replied in the affirmative. The Messenger of Allah,

said: “Then shave your head and feed six poor persons with a Faraq or fast three days, or offer a sacrifice.”[Muslim] The aforementioned verse in Soorah Al-Baqarah highlights the ruling of he who is in the state of Ihraam while he has an ailment in his head. Although it was revealed in connection with Ka‘b bin ‘Ujrah, may Allah be pleased with him, it applies to any Muslim who has the same case.
2- It is permissible to perform prayer in tents:
It is narrated on the authority of Abu Al-Maleeh bin Usaamah, may Allah be pleased with him, that he said,
Once, I set out to the mosque [Masjid] [for the prayer] on a rainy night, and when I returned [home] and knocked, my father asked, “Who are you?” I said, “Abu Al-Maleeh.” On that he said, “On the day of [the treaty of] Hudaybiyah, I saw us in the company of the Messenger of Allah

when we were befallen by rain [which was so little in quantity that] it did not even wet the soles of our sandals. But the caller of the Messenger of Allah

announced: “Offer prayer in your tents!” [Ibn Maajah in his Sunan, Ibn Hajar - Saheeh]
This is an authentic Hadeeth as it is collectively contiguous.
3- The return of Muslims from Hudaybiyah and not performing the Fajr prayer due to their sleep:
The Muslims stayed at Al-Hudaybiyah for over ten days or twenty nights according to Al-Waaqidi and Ibn Sa‘d

but it is reported on the authority of Ibn ‘Aa’ith

, spent a month and a half in this battle outside Madeenah. It seemed that both Ibn Sa‘d and Al-Waaqidi

intended to determine the number of days that the Messenger of Allah,

meant the duration of the Battle that the Messenger of Allah,

, spent since his departure until his return to Madeenah.
After they ended their state of Ihraam for this ‘Umrah (lesser pilgrimage), they took their way of return to Madeenah. When it was night, they moved aside to sleep and entrusted to Bilaal, may Allah be pleased with him, to be vigilant (i.e., to awaken them to perform Fajr prayer). However, he slept and nothing but the heat of the sun awakened them. According to the narration of ‘Abdullaah bin Mas‘ood, may Allah be pleased with him, he said,
We came in the company of the Messenger of Allah

in the year of Hudaybiyah, thereupon the Messenger of Allah

[encamped at a certain place and] said: “Who will keep vigilant for us?” Bilaal, may Allah be pleased with him, said, “I will.” However, they all slept [and remained as such] until sun-rise. The Messenger of Allah

got up and said: “Do as you are used to doing [regarding prayer].” We did accordingly, and then he said: “This is what should be done if one sleeps or forgets [to offer a certain obligatory prayer].”[Abu Daawood]
There are many Hadeeths mentioning that their sleep, which hindered them from performing the Fajr prayer at its due time, was on an occasion other than Hudaybiyah. Some scholars attempted to adapt those different texts. Dr. Haafith Al-Hakami mentions the difference between the narration of Ibn Mas‘ood, may Allah be pleased with him, and the other narrations to the fact that the occasion itself occurred many times; and this is the opinion to which An-Nawawi, Ibn Hajar, Ibn Katheer and Az-Zurqaani

is of the opinion that it is only the recurrence of the story which justifies the adaptation of those narrations.

Jurisprudential Rulings Derived from the Treaty of Al-Hudaybiyah-II