Jurisprudential Rulings Derived from the Treaty of Al-Hudaybiyah-II 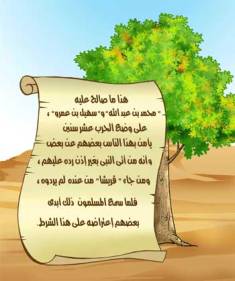 4- The permissibility of and the duration of a truce between Muslims and their enemies:

The Al-Hudaybiyah peace treaty provides evidence to religious scholars and Imaams of the permissibility of making a truce between Muslims and their enemies for a specific term, whether or not it is in return for compensation to be taken from them. The permissibility of it not being for compensation is based upon the fact that the peace truce of Madeenah was done in this way. However, being done for compensation is based upon the fact that logical analogy requires that if it was permissible for no compensation, it is preferable and more acceptable to be permissible for compensation.
However, it is impermissible to suspend a peace treaty on the condition that it is the Muslims who should pay compensation. This is according to the majority of religious scholars because that would humiliate the Muslims and there is no proven evidence from the Quran and Sunnah to support its permissibility. Nevertheless, an exception is made if there is dire necessity that threatens Muslims with destruction or captivity, in which case it is permissible as it is permissible for the war prisoner to ransom himself with money.
According to As-Shaafi‘i and Ahmad

and others, any peace treaty should be made for a specific term, no more than ten years, for it was the same period on the basis of which the Prophet,

, made a peace treaty with the Quraysh in the year of Al-Hudaybiyah. However, others like Abu Haneefah

see that it is permissible for the duration of the peace treaty to be longer than ten years in proportion to the benefit viewed by the ruler. Verification shows that the former opinion is preponderant depending upon the apparent meaning of the Hadeeth. Later scholars say that it is permissible to make a permanent peace treaty and it is not requisite to be for a specific term, as attested by the statement of Allah The Almighty (who Says what means): {Except for those who take refuge with a people between yourselves and whom is a treaty or those who come to you, their hearts strained at [the prospect of] fighting you or fighting their own people. And if Allah had willed, He could have given them power over you, and they would have fought you. So if they remove themselves from you and do not fight you and offer you peace, then Allah has not made for you a cause [for fighting] against them.} [Quran 4:90] The argument behind this opinion is that it is peace not war which determines the relation between Muslims and disbelievers, and that Jihaad was only prescribed for Muslims to defend themselves.
However, this argument is refutable as follows:
a-    He who adopts that opinion later says something that contradicts it: “Jurisprudents agree that a peace treaty should be limited by a specific term for the permanent truce of an unlimited term is invalid.”
b-    The verse he quotes for evidence is abrogated by the statement of Allah The Almighty in which He Says (what means): {And when the sacred months have passed, then kill the polytheists wherever you find them and capture them and besiege them and sit in wait for them at every place of ambush. But if they should repent, establish prayer, and give Zakah [obligatory charity], let them [go] on their way. Indeed, Allah is Forgiving and Merciful.} [Quran 9:5] This is reported by Ibn Jareer from ‘Ikrimah, Al-Hasan, Qataadah and Ibn Zayd, may Allah be pleased with them, and it is narrated by Al-Qurtubi

on the authority of Mujaahid

and commented, “That is the most correct meaning of the verse.”
c-     The basic rule on which this argument is established is refuted by the previous verse from Soorat At-Tawbah, and by the reality of the biography of the Messenger of Allah,

, and his successors after him in relation with their enemies.
d-    The idea that Jihaad was prescribed for Muslims only to defend themselves is unfamiliar (to Islam). Sayyid Qutb

discussed it and when refuting it, showed that it originated as a result of defeat in the face of the attacks of orientalists and failure to understand the transitional nature of Da‘wah (propagation).
5- The absolute should not be subject to absolute restriction:
This is a fundamental rule confirmed by the narration of Ibn Hishaam

on the authority of Abu ‘Ubayd, may Allah be pleased with him, that he said about one of those who were present with the Messenger of Allah,

, that he said to him when he arrived at Madeenah, “O Messenger of Allah, have you not said that you are going to enter Makkah safely?” He said: “Of course. [But] did I tell you that I would enter Makkah this year?” People said, “No.” He said: “Then, it is as Jibreel [Gabriel], may Allah exalt his mention, told me.”This narration carried to the believers the glad tidings of the conquest of Makkah in the near future, as referred to in the true revelation. It also alerted them to the obligation of admitting his command absolutely just as it came with no restrictions that might shift it from its absoluteness.
6- It is obligatory to obey the Messenger of Allah,

, and comply with his orders no matter how illogical or undesirable they might seem:
Regarding the story of Al-Hudaybiyah, it is reported that ‘Umar and some of the Companions, may Allah be pleased with them, disliked the peace treaty that was signed with the Quraysh, seeing that it implied difficult terms of unfairness and injustice against them. However, later on, they regretted their conduct and saw that they had been put in a critical situation: how could they dislike a thing that was approved by the Messenger of Allah,

? They learnt a lesson from this incident that they would utilize in their future behavior. They warned others not to fall into the same mistake as they had fallen into, when they depended upon their own opinions. ‘Umar ibn Al-Khattaab, may Allah be pleased with him, would say, “O people, do not rely on your opinion concerning the religion. By Allah, I saw myself when I rejected the command of the Messenger of Allah

relying upon my own opinion out of independent reasoning, [thinking that] by Allah, I did not deviate from the right; and this was on the day of Abu Jandal.”
Sahl bin Hunayf, may Allah be pleased with him, said, “Do not rely on your opinions! I saw this myself on the day of Abu Jandal in a state that were I able to reject the command of the Messenger of Allah

I would have done so.”
For a period of time, ‘Umar bin Al-Khattab, may Allah be pleased with him, remained in a state of fear that Allah The Almighty would punish him for his conduct on the day of Hudaybiyah. He would relate his story and say, “I kept fasting, giving in charity and emancipating slaves [as expiation] out of fear of the words I uttered on that day, hoping it would then be good.”
In his comment on that incident, Ash-Shaybaani  said, “According to religious scholars, it is obligatory, as is clear from this story, to obey the Messenger of Allah

and comply with his orders, no matter how illogical or undesirable it might seem. Every obligation should have the impression that all good lies in his command, as it is that which is right that ensures happiness in this world and the Hereafter, and that although it was completely perfect, most minds fall short of perceiving its objective and consequence.”

Jurisprudential Rulings Derived from the Treaty of Al-Hudaybiyah-I