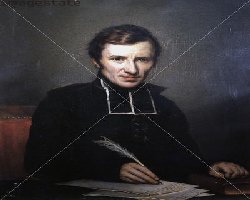 In the 1484 CE Acquittal, Pope Innocent VIII announced that a woman and a human being were seemingly conflicting opposites.
Below are some statements of European philosophers and famous thinkers in the post-Renaissance era:
"If you see a woman, think not that you see a human being, not even a wild being, but what you see is Satan himself, and what you hear is the snake's whistle." [Saint Paul Fantair's recommendations to his disciples]
"The woman was created not only to be subjected to man, but also to endure his injustice." [Confessions of Jean Jacques Rousseau]
"The woman is an animal which the man should beat, feed and detain." [Schopenhauer]
"No man thinks of a woman and then respects her; he either despises her or does not think of her seriously." [Otto Finger]
"Man could imagine himself without a woman; but a woman could hardly imagine herself without a man." [Julian Banda]
"The woman is a tool for laughter: a living statue of stupidity." [French writer Lamennais]
"The woman is a relative being." [Historian Michelet]
"They (the Christians) regarded kidnapping children to bring them up on monasticism among the acts that bring them closer to God. They used to escape from women even though they were their relatives, thinking that merely looking at the woman would make their deeds worthless." [Ma‘aawil Al-Hadm Wat-Tadmeer Fi An-Nasraaniyyah wa fi At-Tabsheer by Ibraaheem Sulaymaan Al-Jabhaan pp72-75]
"The woman has to cover her hair for she is not the image of God." [Ambrose in the 4th century CE]
'Woman distorts the image of man'
Tertullian, one of the leaders of early Christianity, said the following showing mankind the Christian view of woman, "She is the door through which Satan enters into man’s soul. She led him to eat from the unlawful tree, contradicted the law of God, and distorted the image of God, i.e. man." He was referring to the following statement of the Bible: "And Adam was not deceived, but the woman, because she was fully deceived, fell into transgression. But she will be delivered through childbearing, if she continues in faith and love and holiness with self-control." [Timothy I 2:14-15]
The Bible says through the words of Moosa (Moses), may Allah exalt his mention, that because of their treachery against the Lord, plague afflicted the community: "Moses said to them, ‘Have you allowed all the women to live?Look, these people through the counsel of Balaam caused the Israelites to act treacherously against the Lord in the matter of Peor – which resulted in the plague among the community of the Lord! Now therefore kill every boy, and kill every woman who has had sexual intercourse with a man. But all the young women who have not had sexual intercourse with a man will be yours.’" [Numbers 31:15-18]
Chrysostom one of the great devotees of Christianity, said about the woman, "She is an inevitable evil, an obsession to which man is predisposed by nature, a desired blight, a risk that endangers the family and house, a destructive sweetheart and a disaster plated and disguised." He was referring to statement of the Lord who sent His angel to say about her that she is evil itself: "Then a round lead cover was raised up, revealing a woman sitting inside the basket. He then said, ‘This woman represents wickedness,’ and he pushed her down into the basket and placed the lead cover on top." [Zechariah 5:7-8]
Now, consider the statement of Allah The Almighty in His well-guarded Book, the Quran, which no falsehood approaches, announcing to all the world the freedom and humanity of the woman, and restoring dignity to her as being a source of tranquility, affection and mercy for man (which means): {And of His signs is that He created for you from yourselves mates that you may find tranquility in them; and He placed between you affection and mercy. Indeed in that are signs for a people who give thought.} [Quran 30:21]
If the Bible, with its Old and New Testaments, holds the woman responsible for Aadam's (Adam’s) sin and for her coming out of Paradise to work and suffer, and makes even her giving birth to children an expiation of that sin, then how could one expect the followers of that religion to be kind to her?