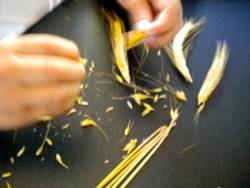 Despite the improvement of the economic conditions of workers in Europe, the socio-economic status of the woman is still critical. The woman still earns half of the salary of the man in most fields of work, if not all. If a woman wants to marry, she has to relinquish her name and the name of her father to become a subordinate to her husband even if in terms of name. In many cases, she has no right to dispose of her property except with the permission of her husband. Many readers will be astonished to know that it is the woman in many cultures who pays the dowry to the man, not vice versa -- although many Westerners nowadays do not follow this practice. Moreover, the man is not responsible for the financial maintenance of his wife.

On the other hand, Islam gave the woman her independent character and identity. She cannot be married except after her permission and consent. She does not change her name, but keeps her father's name and family name after marriage. She has the complete authority to dispose of her property without taking her husband’s permission. She does not have to support herself or her children financially even if she is rich and her husband is poor. If she spends any money, then it is considered as charity given to her husband or a debt that he has to pay back when he has the means to do so.

The status of the Western woman, who still struggles to earn her living in return for mean wages that men would not usually accept, is pathetic.

Because of the deteriorating economic and social conditions, she has become an easy prey to the middlemen of the international prostitution trade. She is also used to promote goods. We always find the photo of a charming woman in advertisements even if the advertisement has nothing to do with women.

The commercial mind thinks actively and employs a group of women in stores and offices under the supervision of a man or two men in order to regulate work and intellectually, physically and sexually dominate the women.Because of these deteriorating conditions, the woman suffers from loneliness, from which she escapes into the arms of any man, who soon gets bored with her and takes another. The woman has to take contraceptive pills early. As a result, officials in the West have found themselves obliged to teach schoolgirls how to use contraceptives. Nevertheless, there are thousands of young girls who become pregnant every year due to their inadequate knowledge about contraceptives. Therefore, mentors and officials instituted programs to teach the use of contraceptives in secondary schools, then in preparatory schools and finally in primary schools when they found that very young girls fall prey to pregnancy the most. Officials are not concerned with the spread of fornication and prostitution; rather, their concern is focused on circulating contraceptives among children.

Western laws had to legalize abortion, even if they did so reluctantly. Cases of abortion spread to the extent that a million cases of abortion take place every year in the US. About the same number of abortions takes place in Europe.

Statistics reveal that most suicide cases take place among young girls who live an anxious desperate life. For the first time in the history of medicine, collective cases of cruel battering of young children have appeared. These cases mostly end up in death or in physical and mental damage.

The woman brought all these calamities and afflictions upon herself through the misfortune of her going out of her home to work in offices and factories. Actually, we are doing the European woman an injustice, because she did not work outside her home willingly. She was forced to go outside her home to work in search of a living after the capitalists demolished the family by taking the father to the furnace of the factories and the cellars of mines. The woman, at that time, had to go out searching for provision. Hands received her and desires exploited her. In order to achieve the goals of the Jews, all means of treachery, apparent and hidden means of crime were used to demolish values and morals and increase the unending greed of the capitalists.