The story of Saba’ 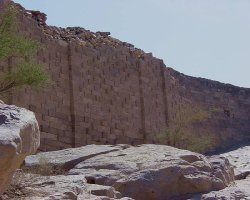 All perfect praise is due to Allah; I testify that there is none worthy of worship except Allah and that Muhammad

is His slave and Messenger, as well as his family and all his companions.

We have a lot to learn from the history of the people of Saba'. First, let's go through some verses of Quran to know them. Allah Says in the Quran (what means):
{There was for [the tribe of] Saba’ in their dwelling place a sign: two [fields of] gardens on the right and on the left. [They were told]: 'Eat from the provisions of your Lord and be grateful to Him. A good land [have you ], and a forgiving Lord.'}
{But they turned away [refusing], so We sent upon them the flood of the dam, and We replaced their two [fields of] gardens with gardens of bitter fruit, tamarisks and something of sparse lote trees}
{[By] that We repaid them because they disbelieved. And do We [thus] repay except the ungrateful?}
{And We placed between them and the cities which We had blessed [many] visible cities. And We determined between them the [distances of] journey, [saying]: 'Travel between them by night or by day in safety.'}
{But [insolently] they said: 'Our Lord! Lengthen the distance between our journeys,' and wronged themselves, so We made them narrations and dispersed them in total dispersion. Indeed in that are signs for everyone patient and grateful}
{And Iblees had already confirmed through them his assumption, so they followed him, except for a party of believers}
{And he had over them no authority except [it was decreed] that We might make evident who believes in the Hereafter from who is thereof in doubt. And your Lord, over all things, is Guardian.} [Quran 34: 15 - 21]
The people of Saba’ were the kings of Yemen and Balqees, the wife of Sulayman

was from them. The people of Saba’ lived happy and joyful lives that were full of blessings; their sustenance was abundant and their trees and plants very fruitful. Allah sent messengers to them, instructing them to eat from what He had provided for them and show gratitude towards Him, as well as to worship Him alone and believe in His oneness. They adhered to these instructions for a while, but then shunned His commandments, and were thus punished by a flood on their land.
Ibn ‘Abbas

and asked him whether Saba’ was a name of a man, a woman or a land; the Prophet

answered: “It is the name of a man who had ten children from his progeny, all of whom were Arab; six of them later lived in Yemen and four in Sham (modern Syria and including some other surrounding nations). The ones in Yemen were later known as the tribes of Mathhij, Kindah, Al-Azd, Al-Asha’iriyyoon, Anmar and Himyar. As for the ones who lived in Sham, they were to be the known tribes of Lakhm, Jutham, ‘Aamilah and Ghassan.”[Ahmad]
Imam Ibn Katheer,

: “…who had ten children from his progeny, all of whom were Arab” is that these ten descended from his offspring, to whom all the Arab tribes originate. It does not mean that they were his direct children, because between him and some of them were two or three generations, and more in some cases. After the flood of the dam hit their area, some remained in their land, while others left to other locations.”
The sign that Allah gave to them refers to their land, which was blessed with fields of gardens, as well as being protected from afflictions, all of which necessitated gratitude. These gardens yielded enough fruits to suffice them, so they were overwhelmed by the happiness of being free from need. Allah commanded them to express gratitude for these favours, namely:
1.    The abundant provision He provided for them from these two gardens.
2.    Good land, a beautiful climate and few cases of sickness (i.e., they rarely became sick due to the nice weather Allah blessed them with).
3.    The forgiveness they were promised in return for expressing gratitude towards Allah.
Instead of continuing to be thankful, they turned away and shunned the commandments of Allah; they shunned monotheism (Tawheed) and His worship, and refused to be thankful; they began worshipping the sun instead of Allah, as the hoopoe bird informed Sulayman

saying, as Allah informs us (what means): {… 'I have come to you from Saba' with certain news. Indeed, I found [there] a woman ruling them, and she has been given of all things, and she has a great throne. I found her and her people prostrating to the sun instead of Allah, and Satan has made their deeds pleasing to them and averted them from [His] way, so they are not guided.} [Quran27: 22-24]
The flood that Allah sent upon them comprised of a huge amount of water, which resulted in the total destruction of their gardens; their fruitful trees were  rendered into others that were useless, bearing bitter fruits.
Look what happened to them! Look how their gardens, with their fruitful trees, pleasant shade and fine natural views, were rendered into thorns and trees with bitter fruits, all of which resulted from their ungratefulness, their refusal of the truth and their association with Allah. What was the result? “…That We repaid them” meaning that they were punished.
Allah Knew that these people needed to travel in order to conduct trade with people of other villages, so He facilitated for them the means to reach these places for trade in a very easy manner, without them having to encounter any difficulties or feeling fearful in the least whilst on their journeys. This was another of the favours that Allah had bestowed upon them. There were villages along their way which were close in distance, so that they would not have to carry much provision and water for their trips; also, the way to their destination was simple and well-known so that they would not get lost. Their travel was safe, regardless of whether they travelled during the day or by night, as an additional bounty.
Nonetheless, they did not appreciate these bounties and favours from Allah, and instead of being grateful, they requested that Allah make their trips lengthy. They became very ungrateful and supplicated for distances that demanded large amounts of provision for their trips; therefore, their journeys became frightening ones, which also required much effort to complete. These people acted just as the children of Israel did with Prophet Moosa,

when they requested him to provide them with green herbs, cucumbers, garlic, lentils and onions instead of having the bountiful provisions and life that Allah had provided them with; this is why Allah addressed the children of Israel and Says (what means): {…'Would you exchange what is better for what is less? Go into [any] settlement and indeed, you will have what you have asked.' And they were covered with humiliation and poverty and returned with anger from Allah [upon them]…} [Quran 2: 61]
The punishment that befell them was exemplary; an illustration for people of how they would instigate the punishment of Allah if they were to ever act with ungratefulness. Also, it is a lesson for the afflicted to persevere through hardships; it is also proof that punishment befalls the disobedient in this life prior to the one they will face in the Hereafter. Mutarraf

used to say: “The best slave is he who when blessed gives thanks and when afflicted, perseveres.”
Suhayb ibn Sinan,

said: “How wonderful is the case of a believer! There is goodness for him in everything, and this is not the case with anyone except for a believer. If prosperity attends him, he expresses gratitude to Allah, and that is good for him; and if adversity befalls him, he endures it patiently, and that is also good for him.” [Muslim]
Satan has taken a vow to mislead mankind, as Allah Says us, (what means): {[Iblees] said: 'By your might, I will surely mislead them all. Except, among them, Your chosen servants'} [Quran 38:82 - 83] Satan was not certain of what he would do, because he could not have been; this is due to the fact that what would happen in the future was something of the unknown and unseen for him, and thus it was merely an assumption on his part. The people of Saba' in general are amongst those for whom Satan's assumption came true, and they indeed followed his way. On the other hand, there was a group of them who did not follow Satan, and these were thus included in the eception mentioned in te abovementioned verses of Chapter Saad.
Allah affirms that Satan has no power or authority over people to force them to do anything; Imam Al-Hasan Al-Basri

said: “I swear by Allah! Satan has no stick with him with which he hits people to (force them to) follow his way; this is nothing but whispers and self-delusion on the part of people – he simply calls people, and they respond.”
The wisdom behind allowing Satan to do what he does and whisper to people is to test them and make evident those amongst them who are truthful, and those who are liars.
There are many lessons one can derive from this great story, the following are but some of them:
There are three types of perseverance:
·   In performing acts of obedience
·   In refraining from prohibitions
·   During decrees of Allah that are painful
There are three ways of expressing gratitude to Allah:
·   By the heart: through having it devoted to the One bestowing the favours and acknowledging that He is the source of all favours.
·   By the limbs: through continuously being obedient to Him and using His favours in ways that please Him.
·   By the tongue: through the repeated mentioning, praising and glorification of Him.