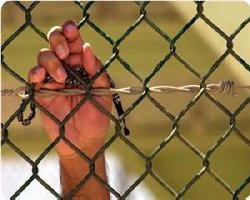 Nine years of the life of Raami Ezzat Al-Barghoothi (29 years) were laden with suffering, the pains of prison and the tyranny of the jailer, because imprisonment today means humiliation, suppression, and penalties.

“When I was in prison, I witnessed the difficult conditions of some of our fellow prisoners. The conditions in these prisons today are very much like those of the early eighties with their horrible suffering, suppression and humiliation,” Rami said.
“Imagine, in the twenty-first century, an officer held a prisoner in solitary confinement for a week in a narrow dingy cell that lacks even the basic amenities for a decent life just because he sneezed. Moreover, the prisoner was fined USD 200,” he added.
He continues, “When this prisoner, who was in Rimonim Prison, ‎objected to this punishment, the fine was doubled to USD 400 to ‎be deducted from his account or what we conventionally call ‎‎“Kantina.”
A Secondary School in Jail:
In 1994, 18-year-old Raami was arrested and jailed for the first time, while he was still a child according to international law. At that time, Raami was preparing for secondary school exams.
On February 9, 1994, heavily armed soldiers broke into his house in Beit Rima, to the north of Ramallah, handcuffed him in front of his family, and transported him in a military jeep to the concentration camp in Al Thaahiriayyah Prison which was under control of the Zionist army.
In that prison, he was subjected to many cruel interrogation methods including Shabh (a process in which the hands of the detainee are cuffed behind his back and a bag of filth is slipped over his head; he is then forced to sit on a chair sized for a small child for several days or weeks, causing him pain in his back and spine), sleep deprivation, and severe beating at the hands of the Zionist soldiers.
The charge is always ready, namely, belonging to an illegal organization, which was Hamas in Rami’s case, in addition to conducting hostile activities against the military forces serving the area. In Rami’s case, these activities were hurling stones, blocking roads and writing anti-Israeli slogans on the walls.
Rami was sentenced before a farcical court; the judges, guards and persecution of which belonged to the Zionist army. This court sentenced him to eight months in prison, and he spent them in Megiddo prison.
New accusations keep him in prison:
Perhaps Raami was waiting for this experience as his mother had taught him that prison is for real men, and he wanted to be a man quickly. In this sense, the prison experience was a very valuable one for him. In Megiddo, he met with Mujahidin and leaders about whom he had heard many stories but whom he had never met. They polished his personality and became close friends, true brothers who would help him be watchful for his religion, mind and thoughts.
Raami left prison after the end of his sentence, finishing his first experience in prison. However, he was later rearrested for new more serious charges.
The new charge was “Throwing Molotov bombs” at the Zionist soldiers. Use of these bombs was common among the heroes of the 1987 Intifada in targeting Zionist military vehicles. This was a very dangerous charge at that time, and the houses of many Palestinians were demolished or sealed because of this activity. Raami was sentenced to three and a half years in prison, non-inclusive of the eight months that he had already spent in prison before the issuance of the sentence.
Four and a half years in prison:
Rami Al-Barghouthi ended his second term in prison on August 16, 1998, and left for Beit Rima trying to restore his normal life. He proposed to one of his relatives and did his best to build a new house by joining his brother in the aluminum trade.
However, the occupation forces had another idea; they rearrested him on July 31, 2000 in a military ambush at the entrance of Beit Rima, where he was directly transferred to the investigation center at Al-Maskubiyyah Prison in occupied Jerusalem. He was interrogated brutally for more than 90 days.
Raami said, “On the first day at Al-Maskubiyyah Prison, an intelligence officer came to me and said, ‘you will remain in prison and will not be released whether you admit the charges or not.’”
He added, “The Zionist intelligence spent 90 days trying to make me admit links with the military arm of Hamas. Meanwhile, the Palestinian Preemptive Security Forces arrested one of my friends for charges of forming military cells belonging to Hamas in the villages in northern and western Ramallah. Zionist intelligence thought that I had links with these cells, so I was arrested too.”
After the 90-day investigation in Al-Maskubiyyah Prison, Raami was transferred to the Military Court in Beit Eil for charges of organizing activities in the Islamic Bloc in College.
“I was surprised that they brought to the court two testimonies signed by two persons – who were imprisoned in Megiddo prison in 1997 - accusing me of interrogating them for charges of collaborating with Shabak. Hence, they sentenced me to four and a half years in prison in addition to a 1000-dinar fine,” Rami added.
(To be continued)