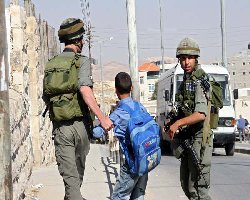 She was holding a banknote in her right hand and her young sister in the other hand on her way to a store where there was a tank. This tank is one of more than one hundred and fifty Israeli tanks currently stationed in the city of Ramallah in the West Bank, as part of the largest Israeli military offensive in twenty years. Ghadeer lives in one of the city's suburbs, which is located a few meters away from the Am‘ari refugee camp which is currently occupied by the Israeli troops backed by 15 tanks. Ghadeer was obliged to go out to buy the basic amenities for her family. Ghadeer explains the reason for that, saying, "There are no more men in the neighborhood where I live, all of whom either fled or are detained by Israeli forces. One of those men is my uncle whom I know nothing about since the Israeli forces took him outside the house." Ghadeer adds in an inquiring tone, "I do not think they are going to fire on children."

During her talk with a reporter of Agence France-Presse, Ghadeer was standing under a large poster bearing a picture of the Palestinian Authority President Yasser Arafat with the caption: "Always with you". This was the order of the day for most of the pedestrians on the streets of the city. They were children the same age as Ghadeer or women -- all of them were compelled to go out on this muddy day after heavy rains.
Juhaynah, a 42-year-old woman, says most men do not go out now for fear of being arrested, adding, "This is my first day since the Israeli occupation of the city on Tuesday. We must go out to buy food, especially for the children." While she was talking, Juhaynah looked with suspicion at a passing by car  carrying  a sign that said "Press". She was about to flee because she heard on the television that the "occupation forces" stole some of these cars and used them as camouflage to shoot bullets at targets of choice. Juhaynah was not alone in thinking in this manner. Her friend Dina, a 21-year-old biology student at the University of Bir Zeit near Ramallah, speaks with sorrow, saying: "I have to forget about [attending] the university. The attempt will be too dangerous."
What the two women bought were some plastic bags filled with water bottles and canned food, but they were extremely upset at not finding bread, milk and eggs, which are the basic food for the children. Although the main doors of the stores were closed, voices could be heard inside some of them. They were the voices of some customers who used the rear doors to enter and exit from the shop. Inside the store, customers lined up in a row and they were all women except one man. This man said, "I don’t need to send my wife to the store since I am used to wars. I lived in Lebanon before; nevertheless, I have not seen a situation like this. They are shooting at anything that moves -- even journalists and ambulances. For them, there are no rules."
Outside the store, Israeli forces were deployed in all corners of the city. Armored vehicles moved along the streets announcing a curfew through loudspeakers and threatening to shoot anyone who tried to leave their house. However, those warnings did not prevent militants from the Palestinian resistance from camping in one of the city's streets pointing their weapons and firing guns at the soldiers of the occupation. They believe it is necessary for the resistance to continue.