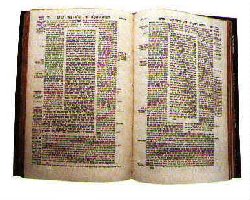 The word "Talmud" is derived from the Hebrew root Lmd, which means to study and learn as in the phrase "Talmud Torah", i.e. Study of Divine Law. The Talmud is one of the most important religious books of the Jews, which is the main product of the oral divine law or the rabbis' interpretation of the written law (Torah).

The Talmud is regarded as holy based on the consideration that the Holy Spirit himself inspired the words of the Talmudic scholars and that the oral laws are equal in status to the written law. The Talmud comprises religious rulings or a set of Jewish jurisprudential laws and a record of the discussions that took place in the Jewish jurisprudential Talmudic seminars on legal topics (Halakha) and hortatory topics (Aggadah). The Talmud has become synonymous with education based on oral divine law.
This shows that the Talmud is similar to exegesis, as it refers to the divine law that Pharisee rabbis received orally from the Jews and wrote down secretly from generation to generation. Therefore, the Talmud is sacred to the Pharisees (who constitute most of the Jews now). The Babylonian Talmud was explained by the Jewish scholars of Babylon, and the Palestinian Talmud was explained by the Jewish scholars of Palestine. The rest of the Jewish sects deny it.
Those who consider the Talmud sacred raise its status over the Torah and say about it: "The one who studies the Torah has done a virtuous act that does not deserve any reward; the one who studies the Mishnah (text of the Talmud) has done a virtuous act that deserves a reward; and the one who studies the Gemara (explanation of the text) has done the greatest [act of] virtue."
The content of the Talmud is not very different from the content of the Torah; [however] it is even more dangerous. In the Talmud the Jews claim that their souls are part of Allah The Almighty and that they are higher in the Sight of Allah The Almighty than the angels. It also says that whoever hits a Jew has hit Almighty God; the Jews have access to the property and lives of the other nations because these properties – according to them – belong to the Jews; non-Jewish souls are Satanic; non-Jewish people are dogs and donkeys that were created in the form of human beings to be suitable for serving the Jews; and that the Jew must kill the righteous people from the non-Jews.