Gaza: A Symbol of Honor and Pride 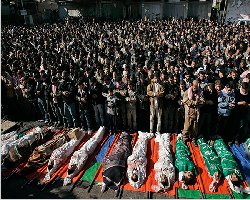 When one reflects on the status quo of our Muslim Ummah (nation), the Ummah of dignity and pride, he finds it comprised by either a besieged people or wounded ones, with neither determination nor power. Wherever you direct your gaze, it will come back to you dull and discomfited. We have turned weak after having been strong, humiliated after being exalted and disunited after we being united. Islam has become strange as it was strange at its very beginning. As such, after they were once being fought by enemies, Muslims are fought now by their Muslim brothers. The superiority of the Muslim Ummah has been lost due to the ignorance of the children, the hopelessness of the scholars, the hegemony of the rulers and the cunning of the enemies. Therefore, we have become like the orphans on the tables of villains. There is neither power nor strength save in Allah The Almighty.

Gaza the proud screams for help, but there is no one to help. It cries out but there is no one to respond. However, these burning hearts which long for martyrdom and are eager for death, will never surrender. Such hearts are keen on death, just as the Zionist enemy is keen on life. The Muslim Ummah is dignified and noble, rejects disdain and never surrenders to either moral or religious collapse.
We wish we had the chivalry of Al-Mu‘tasim who conquered Amorium in response to a woman's cry.
While victory has its reasons, defeat and humiliation have their reasons as well. may Allah bless the time of Haaroon Ar-Rasheed, when Nikephoros, king of the Romans, declined to pay the Jizyah (a tax levied on non-Muslim subjects in lieu of military duty and state protection) willingly and in submission, and sent a letter to Haaroon ordering him to return their money and threatening him with a bloody war. Haaroon thereupon got up and wrote on the other side of the letter, "From the Commander of the Believers, Haaroon Ar-Rasheed, to Nikephoros, the Romans' dog; the answer is what you will see, not what you hear. I will send you an army whose beginning is in your place and its end is here." May Allah The Almighty bless that time, the time of glory and dignity.
Nevertheless, the victory of Allah The Almighty will inevitably come, because it is one of the ways of Allah The Almighty in the universe. Allah The Almighty Says (what means): {[They continued] until, when the messengers despaired and were certain that they had been denied, there came to them Our victory, and whoever We willed was saved. And Our punishment cannot be repelled from the people who are criminals.} [Quran 12: 110]
Nonetheless, victory is not cheap. Rather, there must be hardships and trials and then victory will be attained after despair of all the apparent causes of victory on which people depend, and victory will come from Allah The Almighty and His Punishment will afflict the criminals. This fact is supported by evidence from the Sunnah (tradition) of the Prophet

.
Prophetic good news:
Despite the brutal blockade and the savage massacre which turned women widows, children orphans, and left men dead; despite leaving the Ummah's awakened conscience in fetters and the Zionist arrogance more powerful, we certainly believe that victory will inevitably come and there will be a battle between us and the Jews, even if it seems far away. On that day, indeed victory will be for Allah The Almighty, the Messenger of Allah

and the believers. This is the promise of the Messenger of Allah

said: "A group of my Ummah would remain adherent to the truth, those who failed them, would not harm them until the command of Allah comes while they are in this state." [Muslim, At-Tirmithi and Ibn Maajah]
In conclusion, I say that our hopes spring from our pains and trials create sincere men. Are there people to defend the Muslim Ummah other than the Muslims themselves? Will Islam be protected by non-Muslims?