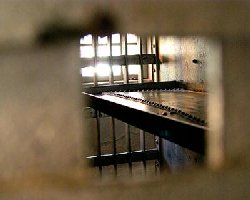 Raasim Al-Bayaari, the head of the Union of Palestinian Laborers, declaimed that a rabid Israeli detention campaign in 2002 involved 90 Palestinian laborers by the Israeli police. The detainees were kept inside iron cages in Ramla police station, under the supervision of the Ramlah Police Commander, Egiel Haddaad.

Al-Bayaari added in his declaration, “Whilst condemning such racist practices committed by the Israeli police against our laborers, we confirm the fact that the file of the Israeli police practices against the Palestinian laborers contains numerous inhumane violations, such as usurping their rights, hounding them in their workplaces, presenting them to unjust courts, shooting them, committing massacres against them, subjecting them to humiliating searches, and intentionally liquidating them.”
He went on to say, “This was shown in a clear confession broadcast by the Israeli TV on March 3, 2002, by Rami Kabuln, a major in the occupation army, who confirmed that he received commands from Colonel Yair Nafih to kill innocent Palestinian laborers.”
Al-Bayaari added, “The Israeli police recently detained Palestinian laborers in iron cages and this is intended to humiliate them and debase their humanity. This uncovers the hateful racism and discrimination policy of what is called the state of Israel, which was established, from the beginning, on usurpation of the land and the rights of the Palestinian people. So, it is to be expected from this colonial racist entity, its police and soldiers, to undertake the policy of debasing and dishonoring humans.”
He went on to say, “This practice of the Israeli police in Ar-Ramla, by the knowledge and under the supervision of the police commander there, is an inseparable part of the official policy of the Israeli government, stained with the blood of our laborers and people. Based on this, in the aftermath of this heinous incident, we call upon the ILO and all labor unions and syndicates and human rights organizations to adopt a serious stance on this inhumane crime, and to strongly condemn actions of such a scandalous nature, and oblige the Israeli government to respect the charter of human rights and the rights of Palestinian laborers.”
Al-Bayaari called upon “…the ILO to provide protection and social and humanistic justice for Palestinian laborers; and also the Arab Labor organization, unions and syndicates to address the scandalous Israeli practices against our Palestinian laborers, and provide them with necessary support to strengthen the steadfastness of our laborers who are suffering from the 18-month Israeli besiegement and closure. Finally, we call upon the UN to move quickly to stop the arbitrary Israeli policies against our laborers, and provide international protection for our laborers and disarmed people.”