The Origin of Judaism 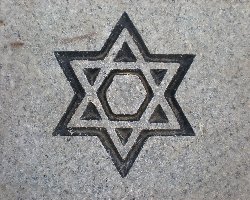 Ya‘qoob (Israel), may Allah exalt his mention, emigrated along with his clan, estimated at 70 members, from Canaan (Palestine and its surroundings) to Egypt in nearly the 17th century C.E., under the pressure of famine and draught. [Genesis 46:27] They were warmly received by Yoosuf (Joseph), may Allah exalt his mention, the first minister of Egypt's king, and settled in the region Jaasaan (Hebrew: Rameses At-Tumailaat valley, Ash-Sharqiyyah). [Genesis 47:11]
During the four centuries of their stay in Egypt, the offspring of Israel (Ya‘qoob), may Allah exalt his mention, divided into twelve tribes, each was attributed to one of the twelve sects.
When Moosa (Moses), may Allah exalt his mention, was sent with the message of monotheism between the 13th and the 14th centuries C.E., to the children of Israel, and the Egyptian Pharaoh and his people, the children of Israel believed in it except a few of them. This is how Judaism was born.
Since the clash with the Egyptian Pharaoh and his people was inevitable, the children of Israel left Egypt [Quran 2:49-50; 20: 77-88] [see also Exodus 13-14] in about 1280 C.E., apparently during the lifetime of the Egyptian Pharaoh Ramses II.
After the Exodus of the Israelis from Pharaonic Egypt to the desert of Sinai, they invaded the land of Canaan under the leadership of Joshua, the successor of Moosa, may Allah exalt his mention, and stayed there.
After the death of Sulaymaan (Solomon), may Allah exalt his mention, the Kingdom of David (established in 990 C.E.), was divided into two sub-kingdoms: Israel in the North and Judah in the South in 922 C.E. They were involved in long mutual wars which continued until they were destroyed at the hands of the Babylonian king Nebuchadnezzar who invaded Palestine twice; in 596 and 587 C.E., and took great multitudes of the Jews to Babylonia where they stayed for 50 years known in the history of the Jews as the Babylonian capture.
When the Persian King Cyrus overpowered the Babylonians in about 538 C.E., he released the Jewish captives who returned to Palestine but without a state, since they served the Persians and after them the successors of Alexander the Macedonian (Antiochus) and finally the Romans.
Along that period, a number of them left Palestine in many directions in Asia and Europe.
In 135 C.E., the Romans under Emperor Hadrian suppressed a revolt led by the Jews in Palestine, during which they ruined the Temple of Solomon and drove the Jews out of Palestine, estimated at 50,000; and that was the beginning of theDiaspora.
However, before the Diaspora, the Jews who had previously left Palestine for Europe, settled in the North and Central Rhine, and strove to spread Judaism among the idolaters from the Germanic people and the Slavs.
After the Diaspora, they spread in many areas and lived among many peoples in Persia, Turkestan, India, China, through Caucasia, Iraq, Egypt, Barqa (in Libya), North Africa, the Iberian Peninsula (Spain and Portugal), the Arabian Peninsula up to Yemen, Abyssinia and some time later parts of Black Africa. Of course, this led many from among different races to embrace Judaism.
However, this racial diversity refutes the argument that Judaism is national, and it also cancels out the Anti-Semitism argument raised by the Jews whenever they confront a catastrophe, for the spread of Judaism in such a way gave birth to generations embracing Judaism, even though they were not Semites by origin.
Before and after the Diaspora, the Jews were on the margin of the community in all the societies in which they lived, because they were different in belief from the others. This is why they always formed self-contained segregated minorities living in specific areas (ghetto). Since they were far from rule, they dedicated themselves to economic activity and dominated the markets of finance and trade.
With the beginning of the national state in the 19th century C.E., the European Jews started to think about founding a national homeland to assemble and move them from the margin of the communities in which they lived to become a central power. This was realized in 1948 C.E., after forming the World Zionist Organization as a result of the first Zionist Congress held in Basel in 1897 C.E.
Furthermore, the Jews have 39 certified Books, called the Old Testament. They are divided into four divisions:
The first division consists of the first five essential Books:
1-   Genesis: it relates the history of the world.
2-   Exodus: it addresses the existence of the Children of Israel in Egypt and their coming out of it.
3-   Deuteronomy: it addresses the Jewish canon rulings; and Leviticus, which deals with acts of worship.
4-   Numbers: it addresses Jewish statistics of the number of their tribes, armies and wealth.
The second division of the Old Testament consists of 12 books, all dealing with the history of the Children of Israel after their takeover of the land of Canaan.
The third division consists of 5 Books, containing their hymns and sermons.
The fourth division consists of 17 Books, each relating the story of one of their Prophets after Moosa (Moses), may Allah exalt his mention.
The Talmud is a collection of explanations of the canons orally transmitted from Moosa. They are two:
One was written down in Palestine; and the other in Babylonia.
The Jews were divided into more than one sect, which disputed whether to adopt the Books of the Old Testament and the oral speech of Moosa, or to deny some of those. Among the most important of those sects, a mention may be made of five:
Pharisees (scholarly), Sadducees, Essenes Samaritans and Hasideans "pietists".
Only two of those remain; i.e. the Pharisees (scholarly), and the Essenes. However, there are great differences between them concerning rites, ceremonies and transactions.
The contemporary Jews are divided into Sephardim, i.e. the Eastern Jews, containing those of Arab origin along with those coming from Spain, Portugal and the Balkans; and the Ashkenazim, i.e. the Western Jews.