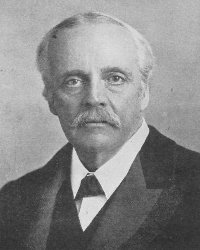 Arthur Balfour was a conservative British politician and a Christian Zionist. He was the architect of the notorious declaration or promise that carried his name, issued by the British government on November 2, 1917 C.E.

His education was deeply grounded in the teachings of the Old Testament.
He paid special attention to the Jewish issue from 1902-1905 C.E,, when he was the British Prime Minister, especially when the waves of Jews from Eastern Europe began to invade Britain, which he opposed.
In 1906 C.E., he met the Zionist leader Chaim Weizmann, whom he admired a great deal.
He paid special attention to Zionism once again when he became the British Foreign Minister in 1916 C.E., in order to confront the revolutionary tendency widespread among the Jews of Eastern Europe, and due to his faith in the ability of the Jews to influence the American president Wilson to back the Allies, let alone the strategic aims gained by Britain because of its control over Palestine under the claim of caring for Zionism.
He supported Zionism in the peace conferences held after World War I that admitted all mandates throughout the Arab East.
He retired from political life in 1922 C.E., and took part in the inauguration of the Hebrew University in 1925 C.E. However, he was received by a general strike in Palestine, and noisy aggressive demonstrations in Damascus, which forced the French authorities to take him out surreptitiously under heavy guard.