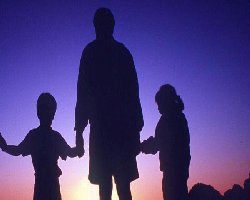 Allah The Almighty mentioned in His Book that one of the characteristics of the faithful believers is their refraining from committing what is unlawful. He Says (what means): {And they who guard their private parts except from their wives or those their right hands possess, for indeed, they will not be blamed.} [Quran 23:5-6] No doubt, a chaste noble father begets chaste noble children like him.

Let the youth remember that the most precious wedding gift is chastity prior and concomitant to marriage, along with sincerity to the spouse afterwards.

Although some fathers during their youth were not chaste, they now truly aspire and sincerely wish that their children would be saved from immorality in this age of the AIDS epidemic.

So, parents should be a good model of chastity for their children, and should not forget to clarify that in chastity, there is a promise of happiness for those who have maintained their purity and controlled their desires until they got married.

Of a surety, your comments on what they see in TV programs and serials or read in books and articles should be studied, placing emphasis, without ostentation, on the beauty of modesty and reverence for religious commitment, and the outcomes of adherence to praiseworthy manners, wherewith man, first, obtains the good pleasure of Allah The Almighty, and, second, maintains his health, and becomes happy in this World and the Hereafter.

The rein of chastity is not intended to destroy man's freedom, as alleged by those who follow their whims. Nay! It is rather a tool to benefit from, and direct it for the good of people. In the absence of the rein of chastity, it is, most likely, that the instinct which is lurking in the human depths, may be unleashed at any moment until it ruins him and others along with him.

Always remind your child of the Quranic principle referred to by the statement of Allah The Almighty Says (what means): {…And fulfill [every] commitment. Indeed, the commitment is ever [that about which one will be] questioned.} [Quran 17:34]

Assure yourself as well as others, that you always fulfill your promise and thus, are reliable. If you like to be worthy of others' confidence, start with the simplest things: be exact in your statements: tell a friend, for instance, that you would visit him at 7 pm, instead of the unspecified statement that you would pay him a visit in the evening.

Tell your child that you would go no matter how busy you are because you want to be with him while delivering his speech in the morning at school; and thus, the children would keep their promises.

said: "He is not one of my Ummah (nation), who does not respect the old among us, nor have mercy upon the young among us, nor estimate the right of the learned among us."

If we want to make our children respect others, we should first treat them with respect, and make them feel that they are respected.

Unfortunately, a lot of fathers treat their children as objects and not people, under the pretext that as long as the young are still young, let them remain young. A father may say, for instance, "I told you to do such and such a thing; and I am your father: do you understand?"

Teach your child that respect is to behave politely, talk gently, and hasten to obtain the contentment of the people after the good pleasure of Allah The Almighty.

It is due on you, O father, to clarify to your child that your displeasure with his bad manners does not affect your love for him. Assure your children, again and again, and on every occasion, that you love them all unconditionally. But this should not prevent you from punishing anyone of them who deviates (from the right course), neglects (his duties) and harms others, keeping in mind that punishing him is intended to depreciate his disgraceful act but not to degrade his person or indicate that you do not love him.

j- Favoring Others Over Oneself (Altruism)

Remind them that the men of Al-Madeenah Al-Munawwarah (the Ansaar) were the masters of altruism in the past and present when they gave shelter to and supported the Muhaajiroon who emigrated from Makkah, and let them share with them all their possessions. Thereupon Allah The Almighty revealed in them Quranic verses to be recited to the Day of Judgment in which He Says (what means): {And [also for] those who were settled in Al-Madeenah and [adopted] the faith before them. They love those who emigrated to them and find not any want in their breasts of what the emigrants were given but give [them] preference over themselves, even though they are in privation….} [Quran 59:9]

Teach them to feel the others' needs and that real happiness lies in making others happy.

Remind your children, from time to time, that the gentle well-mannered polite person is closer to people's hearts and more ready to obtain their affection and love.

Remind them of the Hadeeth of the Messenger of Allah

(what means): {…And if you had been rude [in speech] and harsh in heart, they would have disbanded from about you. So pardon them…} [Quran 3:159]

Try to be affectionate and gracious with everyone including your children, and say often the phrases of refinement like "Thank you", "I beg your pardon", and so on. Seek the aid of graciousness in all your behavior.

Be just between your children so that they would feel they are equal in all things: none of them should be rewarded to the exclusion of another, nor should anyone be punished apart from another.

In sum, it is not enough to plant those seeds in the hearts of your children once in their lifetime: on the contrary, you have to look after those plants within your children in order that they would grow as they grow, and adhere to them throughout their life, perchance anyone of them would become a good righteous child causing his father to be happy in this World and after his death.