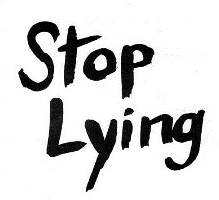 Lying is the source of all evils. It is the negation of faith. It can never exist in a person who has true faith in Allah Almighty. It is universally condemned by all humans with a minimally sound nature. But because it is so universally condemned, we have prettier names for it: It is often mitigated and excused as "forgetting," "stretching the truth a bit," "interpretation," "miscommunication," and so forth. Lying comes in many forms, and all of them are common among Muslims: Gossip, slander, misrepresentation, breaking of promises, and most of all, making deliberately misleading and vague statements.

If you said to someone, "In shaa' Allah, I will be there," while you knew you could not be there for whatever reason, you have lied.

You get the idea. These are all innocent, little white lies, but they are lies nonetheless. There are millions of ways to try to make yourself feel that you haven't lied, but deep down, you know that you are misrepresenting the truth. If you feel that, it is very likely that you have lied. And liars cannot be true believers. That is a contradiction in terms.

Lying is the source of all evils, because those to whom lying comes easy believe they can get away with any misdeed by crafting suitable lies, so they commit other sins or crimes with ease and impunity.

For those who become desensitized to lying, the act brings excitement and pleasure. A psychologist writes: "The liar may feel excitement, either when anticipating the challenge or during the very moment of lying. Afterwards, there is the pleasure that comes with relief, pride in the achievement, or feelings of smug contempt towards the target."

The worst thing about lying is that hard-core liars never admit that they are lying. In most cases, no matter how hard you try, a well-oiled liar can get out of the conclusion that he or she lied. In fact, their inner conscience may be so clouded by their lies that they do not even notice that they are lying.

Lying perpetuates itself. Those who have perfected the art of lying do not tell simple lies that can be proved to be false. We learn the power of lying as children. Children tell innocent lies, and by how their parents, teachers and peers allow, sanction and approve of those lies, their habit of lying grows and matures. Any lie in any given social context needs more lies. As one author puts it, a lie "must be thatched through with another or it will rain through."

Lying is the most pervasive of the great evils that spreads by example. A French author observes, "Nothing is so contagious as an example. We never do great good or great evil without bringing about more of the same on the part of others." When we lie, most people can feel that we have lied, but they do not openly challenge it unless it directly contradicts their interests.

The opposite of lying is not a tactless, heartless, statement of facts, which some psychologists call "truth-dumping." The opposite of lying in Islam are Sidq (honesty) and Ikhlas (sincerity), both of which convey the sense of sincerity of expression and action, the agreement of the outside expression and inside feeling. Truthfulness does not violate wisdom (hikmah), but requires it.

The definition of what is a lie can become a problem. Seasoned liars are very good at manipulating such problems. They misrepresent and justify their behavior by raising the bar of truth so high that everybody seems to always be lying. Once, for instance, I pointed out to someone that he had lied by misinforming me of what a friend had said. He came right back to me by saying that I too had lied because I had said that I was afraid someone might fail a certain test, and I was, in his view, wrong. In this case, this person conflated misreporting, a relatively clear lie, with an expression of opinion, whose validity really depends on the sincerity of the speaker. Such tricks of evasion are many. What seasoned liars want to say is that since everybody lies, there is no point in trying to be truthful.

These tactics are dishonest, and the Prophet

was told to avoid arguing with such people. Allah Says (what means): {Take the way of forgiveness, command what is good, and avoid the ignorant (jahileen)} [Quran 7:199]. ‘Jahil’ (ignorant) is not merely one who does not know, but one whose inner stubbornness does not let him or her acknowledge and submit to the truth.

I recall another incident in which a well-meaning Shaykh (scholar) inflated the definition of sincerity to such an impractical level that it seemed unattainable. The hall was full with an eager audience when the Shaykh, admittedly tired after having given a few lectures at the conference, excused himself saying that he did not really want to talk, being so tired, and if he did, it would be a kind of hypocrisy and lack of sincerity. He walked out as the audience stared at each other in puzzlement. I was not sure if this was a good thing: He may have gotten out of a responsibility by using sincerity as an excuse one time, but I wondered how many other lectures he would go on to give while being tired. Would he think of himself as a hypocrite or liar for that? The point merely is that careless definitions and hair-splitting, used by us sometimes to excuse ourselves from one thing or another, can become justifications for continuing to lie.

This is why the way of the Prophet

and the best scholars of the Ummah (Islamic Nation), the righteous predecessors; was not to engage in hair-splitting definitions and arguments, but to create a burning sense of Allah's presence, the urge to be critical of oneself, and an awareness of the nature of various weaknesses of character, so that people could become their own critics.

It has also been said: "Truthfulness is the identity of the hidden and the evident. The outside of a disbeliever or a hypocrite is better than his inside." Also, "Truthfulness is to proclaim the truth even at occasions of great harm."

Al-Junayd of Baghdad said: "The truthful person changes (his state) forty times a day, while an ostentatious person stays on the same state for forty years." Imam Ibn al-Qayyim

writes in explanation of these words: "The thoughts and objections that occur to the truthful do not occur to the liar. Even Satan does not interfere with the liar too much, for there is no good inside of a liar to begin with which he would want to corrupt. The truthful is challenged by these objections or threats, and moves from one action to another, one state to the next, fearing complacency and losing his ultimate goal, Allah Almighty. This is the state of the one truthful in seeking Allah. Similar is the case with one who is truthful in seeking knowledge, or this world, and so on. Anyone who is truthful in his search is never stuck in the same state."

It has also been said: "Three things never part from a truthful person: Sweetness [of being truthful], saltiness [of consequences], and awe [of the Truth God]."