The Guards of the Prophet - I 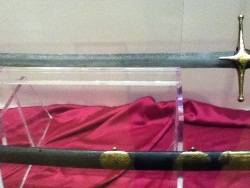 was among those who accompanied the Prophet

from the beginning of his Da’wah (call) to Islam, and is considered to be his nearest friend. He was the first Rightly-Guided Caliph, and one of the ten Companions who were given the glad tidings of entering Paradise. He supported the Prophet

and he was the first to accept Islam at his hands.

was the one who guarded the Prophet

in his bower on the day of Badr. After the death of the Prophet

he was recognized as his Caliph (successor), and this happened exactly on Tuesday, the second of Rabee’ Al-Awwal, in the year 11 A.H. His caliphate lasted for about two years and four months, and he died on Monday, the 22nd of Jumadah Al-Oola, in 13 A.H.

The name of his father is Malik ibn Uhayb ibn ‘Abd Manaf ibn Zuhrah Az-Zuhri Al-Madani. He witnessed Badr and all the battles, was one of the ten Companions who were given the glad tidings of Paradise, and was the last one of them to die. He was the first to shoot an arrow in the cause of Allah, and he was the cavalier of Islam. He was also among the six councilors appointed by ‘Umar

. He was the leader of the army of Islam in the conquest of Iraq. Moreover, the Prophet

praised him by saying: "Shoot, may my father and mother be sacrificed for you! [this is a phrase used by the Arabs to express love and esteem].” [Al-Bukhari]

was among the guards of the Prophet

reported that, “the Prophet

got no sleep at one night and he said: "If only a righteous man from my Companions [would] come to guard me.” Then we heard the sound of [a] weapon; thereupon the Prophet

called: "Who is this?" and the man outside replied, "I am Sa’d ibn Abi Waqqaas, O Messenger of Allah. I came to guard you." ‘Aa'ishah

then slept till I heard him snore." [Muslim]

His nickname is Abu ‘Abdullaah. He was fifteen years old when he embraced Islam, and was among the seven forerunners to Islam. His mother is Safiyyah bint ‘Abdul-Muttalib ibn ‘Abd Manaf, the aunt of the Prophet

. He was among those who emigrated to Al-Habashah (Abyssinia), and he also emigrated to Madeenah. He married Asmaa' bint Abi Bakr

witnessed Badr and all the battles with the Prophet

. He guarded the Prophet

on the day of Al-Khandaq (the day of the Battle of the Trench). Furthermore, he was among those sent by ‘Umar ibn Al-Khattaab

as reinforcement to ‘Amr ibn Al-‘Aas

in the conquest of Egypt. When ‘Umar

was among the six Companions who were appointed by him to choose the caliph from amongst them.

was treacherously assassinated at the hands of a man called ‘Amr ibn Jurthoom in the Battle of the Camel, and he was buried in the outskirts of the city of Al-Basrah.

He is Sa’d ibn Mu‘aath ibn An-Nu’man ibn Imru' Al-Qays Al-Ansari Al-Awsi Al-Ash-hali, and his mother is Kabshah bint Rafi’. He was one of the Companions and came from the people of Madeenah. He was the head of the tribe of Al-Aws, and his nickname was Abu ‘Umar. He embraced Islam at the hands of Mus‘ab ibn ‘Umayr

sent to Madeenah before the Hijrah (Emigration) to call its people to Islam. He witnessed Badr, and on that day he guarded the Prophet

in his bower. He also carried the flag of the tribe of Al-Aws in Badr and showed extreme courage. He witnessed Al-Khandaq, in which he was injured, and when he died he was thirty-seven years old.