Wiping over the Khuffs 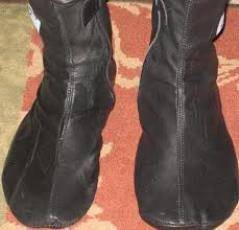 Islam is a religion of easiness and simplicity, not difficulty and strictness; it decrees suitable rulings for each case, which ensure fulfilling legal purposes and duties with no difficulty.

This applies to the rulings on ablution decreed by Almighty Allah. To illustrate, sometimes there is something covering the organs washed during ablution which is hard to remove and maybe needed as a means of protection, either for the feet, such as khuffs (leather socks, shoes or the like), or for the head (such as turbans and the like), or for protecting wounds or the like such as splints, bandages, etc. It is deemed permissible for the one performing ablution to just wipe over such coverings instead of removing them and washing what is underneath. This is the easiness made by Almighty Allah for His servants, relieving them from difficulty and strictness.

As for the permissibility of wiping over the Khuffs (and their likes, such as socks) during ablution, instead of removing them and washing underneath, it is stated in many Mutawatir (continuously recurrent) Saheeh Hadeeths (authentic narrations) that the Prophet (

) used to wipe over them whether at home or on journey; he (

As regards the legal proofs of the permissibility of wiping over the Khuffs, Al-Hasan

said, “I was told by seventy of the Companions of Allah’s Messenger (

) that he used to wipe over his Khuffs (with his wet hands during ablution).” Moreover, Imam An-Nawawi

said, “The permissibility of wiping over the Khuffs was reported by innumerable Companions.” Imam Ahmad

also said, “There is not a shadow of doubt in my mind concerning the legality of wiping over the Khuffs, as there are forty Hadeeths of the Prophet (

) indicating its permissibility. In addition, Ibnul-Mubarak

and others stated that there was no disagreement among the Companions concerning the permissibility of wiping over the Khuffs during ablution. Likewise, Ibn Al-Munthir

and others reported the scholars’ consensus on the permissibility of such an act during ablution. In addition, the adherents of the Sunnah (Prophetic tradition) and Muslim Community unanimously agree on its permissibility, unlike those innovators in religion who do not deem it permissible.

Wiping over the Khuffs during ablution

This act is permitted and observing it is better than taking off the Khuffs and washing the feet, as the former is a sign of making use of the legal permission made by Allah, the Almighty, following the example of the Prophet (

), and contradicting the religious innovators. Wiping over the Khuffs is a spiritual removal of the impurities underneath. Also, the Prophet (

) never changed the condition of his feet to perform ablution; if he (

It is permissible for a resident (i.e. not a traveler) to keep wearing Khuffs and wipe over them during ablution for a period of one day and night. As for a traveler whose journey legally allows shortening prayer (i.e. when the destination is far enough), the period of permissibility is three days and nights, according to the Hadeeth related by Imam Muslim

which states that the Prophet (

) specified three days (during which one can wipe over his Khuffs) for a traveler and one day and night for a resident. For both (the resident and the traveler), the period of permissibility of wiping over the Khuffs starts from the time of being in a state of ritual impurity (caused by passing urine, stool or wind) after wearing the Khuffs, as ritual impurity necessitates ablution (for prayer). Yet, some scholars view that the duration begins from the first ablution after being in a state of ritual impurity.

The Conditions of Wiping over the Khuffs, the Socks, and the Like

1- To be in a state of ritual purity (i.e. a state of ablution) upon wearing them, for it is stated in the two Saheehs (Al-Bukhari and Muslim) books that the Prophet (

) said to the one who wanted to help him (

) in taking his Khuffs off to perform ablution: “Leave them as I had put them after performing ablution.” [Al-Bukhari, Muslim and others]

It is also narrated that Safwan Ibn ‘Assal, (may Allah be pleased with him) said: “We are commanded (by the Prophet

) to wipe over the Khuffs if we put them on while being in a state of ritual purity (i.e. after performing ablution).” [Ahmad]

2- The Khuffs must be lawfully acquired, gotten, and made. To clarify, if they are taken by force, or made of silk (for men), it is impermissible to wipe over them during ablution. In a word, a legal permission is not applied to what is already illegal.

) wiped over his socks and his shoes while performing ablution, as stated in the Hadeeth related by Imam Ahmad

and other compilers of Hadeeth, and deemed Saheeh by At-Tirmithi

. Wiping over such things during ablution is valid until the legal period of permission ends regardless of the frequency of taking them off and putting them on.

) wiped over his turban during ablution. To illustrate, ‘Umar Ibn Al-Khattab (may Allah be pleased with him) said: “He who is not purified by wiping over the turban (i.e. does not deem it sufficient for wiping over the head), then may Allah not purify him.”

As for splints, bandages, and the like, it is permissible to wipe over them during ablution (without removing them). Moreover, one is permitted to wipe over plasters that cover wounds; all such coverings are permitted to be wiped over provided they cover only the injured area or the necessary parts which need to be covered for treatment. However, if the splint, the bandage, or the like, covers more than the injured area unnecessarily, the unnecessary parts must be removed. In addition, it is permissible to wipe over splints in both states of minor and major ritual impurities, and there is no fixed period for the permissibility of wiping over them. In other words, it is permissible to wipe over the splint until it is removed or the broken limb heals. In a nutshell, the permissibility of wiping over the splint during purification is dependent on the necessity of the cover.

The proof of the permissibility of wiping over the splint is the following Hadeeth narrated by Jabir (may Allah be pleased with him); he reported: “Once, we were on a journey and one of us was injured in his head by a stone. Then that man had a wet dream, so he asked his companions saying, ‘Is it permissible for me to perform Tayammum (dry ablution)?’ They answered him saying, ‘We do not see any legal permission for you as you are able to use water.’ So, the man had a ritual bath after which he died. When we came to Allah’s Messenger (

) said, ‘They killed him; may Allah kill them! Why did they not ask when being ignorant, for inquiry is the cure for ignorance? It would have been sufficient for him to perform Tayammum and to bandage his wound with a piece of cloth over and then to wipe over it (the piece of cloth).’ ” [Abu Dawood and Ibn Majah, and deemed Saheeh by Ibn As-Sakan]

The Areas to Be Wiped over

Wiping is to be applied to the upper part of the Khuffs or the socks. As for the turban, most of it should be wiped over, especially its folds. However, the splint has to be wholly wiped over.

The Way Wiping over the Khuffs is performed

Wiping over the Khuffs (during ablution) is to be by passing one’s wet fingers from the toes towards the leg. The right foot is to be wiped over with the right hand, and vice versa. Also, one should open one’s fingers during wiping, and should not repeat wiping. May Allah guide us all to useful knowledge and righteous deeds.

Extracted from: A Summary of Islamic Jurisprudence