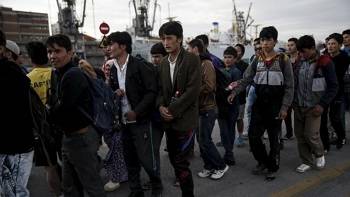 A record number of refugees have crossed the Mediterranean into Europe this year, breaching the half-a-million mark for the past nine months, according to the International Organization for Migration (IOM).

As of Tuesday, the group said 522,124 people had travelled by sea to reach the continent.

About 388,000 have entered via Greece, and more than 175,000 of the total came from Syria - the largest single refugee source as a country.

IOM estimated that 2,892 people have died attempting the crossing. The majority of those deaths were among people seeking to reach Italy via North Africa.

Despite the risks, thousands of refugees still continue to make the dangerous journey.

On Tuesday, the Libyan coastguard said it rescued 346 refugees, including almost 100 women and children, who were crammed onto rubber boats and stranded off the country's coast.
Three boats were intercepted a few kilometres off Garabulli and Ghot el-Rommane, east of Tripoli, coastguard officer Mohamad Jannane, who took part in the operation, said.

Jannane said the refugees, who had been trying to cross the Mediterranean to Europe, were shuttled in a three-hour operation to a naval base in Tripoli before being transferred to reception centres.

"The rescue operation was carried out between 23:00 GMT on Monday and 02:00 GMT on Tuesday morning because our boats are small and they were overloaded," the officer said.

He said that 34 women and four children were among 230 refugees in two of the boats, while the third was carrying 116 people, including 54 women and two children.

Libya has for years been a stepping-stone for refugees, mostly from sub-Saharan Africa but also Syria and other Middle Eastern countries, seeking to travel to Europe.

In an upsurge of attempted crossings this week, the Italian coastguard said it had coordinated the rescue on Monday of 1,151 refugees in 11 operations off the Libyan coast.

Separately, the charity Doctors Without Borders (MSF) said its ship Dignity 1 had saved 373 people, including 62 women and 10 children.
Those refugees were transferred to Italy.

The influx has strained the 28-nation European Union and prompted a rash of border closures. This year's influx has long since passed the previous record of some 219,000 people in 2014.

Meanwhile, Austria warned that it may have to use force to ease any backlog of refugees if Germany decided to no longer let them enter via their shared border, but will continue to work closely with its neighbour to expedite the flow.

Germany has reimposed border controls and curbed rail traffic from Austria in an effort to slow an influx of refugees, thousands of whom reach its territory daily.
By contrast, Austria is largely letting refugees stream onto its soil from Hungary unhindered and is shuttling them towards Germany.

Asked by a reporter what would happen if Germany "seals the border", Interior Minister Johanna Mikl-Leitner said: "Then there will be a massive backlog here in Austria and therefore here we quickly need a European answer."

Germany's suspension of regular traffic on one major rail link with Austria has prompted many refugees to cross the frontier by other means.

Hundreds have been lining up at a crossing near the Austrian city of Salzburg each day.

Refugees and migrants line up to board a bus after arriving by the Blue Star Patmos passenger ship at the port of Piraeus, near Athens, Greece, September 30, 2015