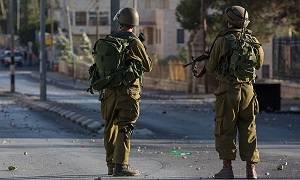 According to the latest Palestinian figures, since Oct. 1 of last year, at least 186 Palestinians have been killed and another 15,645 injured by Israeli troops in the Gaza Strip and in the Israeli-occupied West Bank and East Jerusalem.

Over the same period, according to Israeli figures, 33 Israelis have been killed in a months-long wave of violence that some observers are calling a third Palestinian "Intifada" ("uprising").
In a statement, the Palestinian Red Crescent (PRC) noted that 41 of the 186 Palestinians slain had been killed since the beginning of the current year.

According to the PRC, over the course of the last five months, Israeli forces have killed 41 Palestinians from East Jerusalem, 73 from Hebron and Ramallah, 19 from Jenin, 10 from Bethlehem, 10 from Nablus, and five from Tulkarm and Salfit, in addition to 25 Palestinians from Gaza and two Arab-Israelis.

The NGO also noted that 88 of the slain Palestinians had been killed after allegedly stabbing -- or attempting to stab -- Israelis; 53 during clashes with Israeli troops; 21 after allegedly carrying out vehicular attacks; four by Israeli bombardments; and two after having been run over by Jewish settlers.

It also noted that, over the same period, a Palestinian child had been killed in Gaza by an explosive device, while one Palestinian detainee had died in an Israeli prison.

The PRC went on to state that, since last Oct. 1, 15,645 Palestinians had been injured by Israeli gunfire, 1,418 of whom had been struck by heavy ammunition, while another 3,153 had sustained injuries from rubber bullets.

Another 10,608 had suffered temporary asphyxia due to teargas fired by Israeli forces, the PRC said, while 464 others had been injured after being beaten by Israeli troops.

Israel's Magen David Adom paramedic service, meanwhile, says that, over the same period, 33 Israelis have been killed and 311 injured in alleged attacks by Palestinians, including 38 who were seriously injured and 48 who sustained moderate wounds.

The Israeli foreign Ministry, for its part, alleges that, since Oct. 1 of last year, Palestinians have carried out more than 188 knife attacks, 75 shooting attacks and 39 vehicular attacks against Israelis.