Children in US 'scared and depressed' by Trump rhetoric 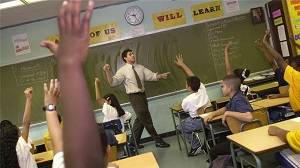 An SPLC survey of some 2,000 US schools found that two thirds of teachers described vulnerable students - including blacks, Muslims, Latinos and other minorities - as affected by rhetoric in the 2016 White House race.

Headscarf-wearing Muslim girls are being called terrorists. Latinos are warned of deportation and teased about wall-building along the US-Mexico border. The N-word is making a comeback, and children younger than ever before are using it.

Although name-calling has always been a feature of playground life, teachers across the US say it has grown nastier since Republican presidential candidate Donald Trump's rhetoric during the election campaign.

"We've seen 10 or more years of anti-bullying work get rolled back by a hostile atmosphere in many schools. Teachers describe disillusionment, depression and discouragement among kids who feel like they now know what people have thought about them all along," Castello said.

An SPLC survey of some 2,000 US schools found that two-thirds of teachers described their vulnerable students - including blacks, Muslims, Latinos and other minorities - as affected by rhetoric in the 2016 White House race.

It shows a spike in racist bullying. For Muslims - or even some non-Muslim brown-skinned children - the acronym "ISIS" has become a stock taunt.

The bullying causes more than just upset. Some Mexican pupils now fear that Trump's promise to deport an estimated 11 million undocumented migrants will come to pass and that they, and their loved ones, will get kicked out of the US, Costello said.

While Trump's focus on African Americans has been limited to ejecting civil rights protesters from campaign rallies, some black youths expressed "irrational" fears that segregation or slavery will make a comeback, researchers found.

Name-calling cuts both ways, and "Trump" has become a by-word for "jerk", added Costello.

Trump, a celebrity construction tycoon, has made headlines and won support, often among lower-class white Americans who lost jobs as US factories moved overseas, with promises of an economic rebirth and tough immigration rules.

For Trump, undocumented Mexicans are often "rapists" who should be kept out by a "beautiful wall" on the southern border. After ISIL-linked attacks in Paris and San Bernardino, California, late last year, he called for a ban on all Muslims entering the US.

He is more circumspect on African Americans. He has criticized protesters from the Black Lives Matter movement and was slow to reject support from David Duke, a former grand wizard of the white supremacist Ku Klux Klan.

While Trump's rabble-rousing is rejected by politicians from both main parties, he is not alone. His rival for the Republican nomination, Ted Cruz, has called for police patrols in Muslim areas to prevent terrorist attacks.

"The backlash against the Muslim community was not as pronounced after 9/11 as it is now," Zainab Chaudry, a Maryland-based campaigner for the Council on American Islamic Relations (Cair), an advocacy group, told Al Jazeera.

"We've seen a trend of candidates making remarks targeting Muslims, Mexicans and other minorities and how that energizes segments of their base. During this election cycle, it has not only become normalized but actually encouraged to throw Muslims under the bus."
Consequences of demagoguery

Teens have told parents that they wish to abandon the Islamic faith. Others have stopped wearing headscarves and started contracting such names as "Mohamed" to the Anglo-friendly "Mo" in a bid to dodge bullying from classmates.

"Many of us came to the US for a system that did justice to all races and ethnicities," Maher Kharma, 44, a Palestinian-American father-of-three in Maryland, who migrated from Jordan in 1993, told Al Jazeera.

"For us to feel the ground shaking beneath our feet and the rules of the game changing is very disheartening."

There is no doubt that Trump has an impact on the young.

Last month, a group of mostly-white teenagers attended an inter-school basketball game at a mostly-Hispanic school in Indiana. The guest fans hoisted banners of Trump and ridiculed their Latino rivals by chanting "Build a wall".

When questioned about this, and similar incidents elsewhere, Trump objected to being asked a "nasty" question.

Teachers warn that it is more than colorful campaign rhetoric. Trump's demagoguery has real-world consequences that are leaving stains of racial tension in classrooms and workplaces across the melting-pot nation, they say.

According to Lauren Fardig-Diop, a teacher at New York's mostly-Latino Bronx Academy of Letters, schoolchildren echo their parents' views of Trump - a mix of admiration, concern and amusement.

"There are two camps. One is in awe of Trump's business success and at how a non-politician has come so far in the race," Fardig-Diop told Al Jazeera.

We've seen 10 or more years of anti-bullying work get rolled back by a hostile atmosphere in many schools.
The toxic mood poses a dilemma for teachers.

They typically deliver lessons on American democracy in election years. The divisive 2016 Republican race has left many wondering whether the topic would spark a row and whether they could remain objective, said Costello.

Ratcheting up a hostile environment

It is not just teachers who are scratching their heads.

Trump's success has sparked debates among rights advocates over whether single candidates are to blame - or whether Trump is just tapping in to ethnic gripes that already exist in swaths of the populace.

Maya Berry, executive director of the Arab American Institute, a lobby group, said the "bigger issue" is not Trump but his many "Republican, male, evangelical Christian" fans who have turned on Muslims in recent years.

For Corey Saylor, who runs Cair's anti-Islamophobia unit, some people are always prone to racial chauvinism, but people like Trump can magnify divisions and convert simmering antipathy into violence.

"People feel they've been given permission to go and do something horrible," Saylor told Al Jazeera.

According to Saylor, Trump's rhetoric contrasts with that of presidents such as George W Bush and Barack Obama, who both visited mosques and rejected any links between attacks and the religion practiced by some 3.3 million Americans.

He pointed to the 11 verbal and physical attacks on mosques and Muslims in the US in January and February 2015, when fears of religious violence were heightened by a strike on the Charlie Hebdo magazine's offices in Paris.

That was lower than the 34 comparable attacks in November and December 2015, when the atrocities in Paris and San Bernardino were accompanied by anti-Muslim electioneering from Trump and others, Saylor said.

"You need a confluence of different things and, certainly, politicians ratcheting up a hostile environment gives certain people a sense that what they are thinking about doing has a greater degree of permissibility," Saylor said.

Whether it is Trump - or the electorate - that has made the 2016 presidential race so alarming for children, Costello said the effects may be felt for years.

Youngsters only witness four general elections before they reach voting age. The unusually hostile on-screen rows between Trump, Cruz and others in this year's contest will leave a lasting impression on the soon-to-be enfranchised, she added.

"This is how we grow future citizens," Costello told Al Jazeera.

"We've just deprived a generation, a cohort of students, of learning how government and politics really should work. Instead we've given them a model of how dysfunctional it can be, and we've not corrected it."