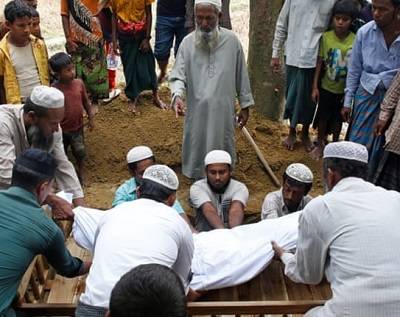 At least 6,700 Rohingya were killed by Myanmar security forces in one month following a government-led crackdown in the country's Rakhine state in late August, according to Doctors Without Borders (MSF).

The figure, published on Thursday in an MSF report, is significantly higher than the numbers reported by Myanmar military officials relating to the same period.

Sidney Wong, MSF's medical director, said the organization gathered the data in six surveys by meeting with more than 600,000 survivors of the violence in Myanmar's northwestern Rakhine state.

Many of these refugees are now sheltering in overcrowded and unsanitary camps in the Myanmar-Bangladesh border area.

"What we uncovered was staggering, both in terms of the numbers of people who reported a family member died as a result of violence, and the horrific ways in which they said they were killed or severely injured," she said.

"The numbers of deaths are likely to be an underestimation as we have not surveyed all refugee settlements in Bangladesh and because the surveys don't account for the families who never made it out of Myanmar."

The report states that at least 9,000 Rohingya died in Rakhine state between August 25 and September 24, with 71.7 percent of those deaths caused by violence.

More than 620,000 Rohingya refugees have fled what the UN has labelled "ethnic cleansing" in Rakhine State since clashes broke out between government security forces and Rohingya fighters on August 25.

The military claims it acted legally in responding to coordinated attacks on border posts by a rebel armed group. Those who fled the violence did so voluntarily, some officials have said.

Myanmar's government has denied allegations of ethnic cleansing and crimes against humanity, but it has refused UN investigators' and journalists' access to areas of the country affected by the violence.

MSF's research, based on the "most conservative estimations", revealed that at least 730 Rohingya children below the age of five-years-old were violently killed between in the month following August 25.

More than 59 percent of those under the age of five killed during that period were shot, 15 percent were burned to death, 7 percent were beaten to death and 2 percent killed in landmine blasts, according to MSF.

Those still entering Bangladesh from neighboring Myanmar continue to "report being subject to violence in recent weeks", Wong said.

"With very few independent aid groups able to access Maungdaw district in Rakhine, we fear for the fate of Rohingya people who are still there," she added.

Bangladesh and Myanmar signed a deal last month for the return of hundreds of thousands of Rohingya refugees, but little is known of its provisions.

State Chancellor Aung San Suu Kyi, who is the de facto leader of Myanmar, has refused to really discuss the plight of the Rohingya.

Aung San Suu Kyi and her government do not recognize the Rohingya as an ethnic group and have blamed violence in Rakhine, and subsequent military crackdowns, on those they call "terrorists".