Obligatory and optional aspects of ablution 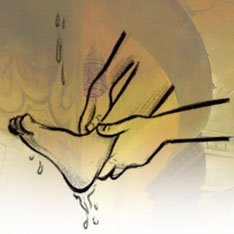 In Islam, ablution, or Wudhoo', is to wash one’s face, hands, arms, head and feet with water. Allah, the Most High, Says (what means): “O you who have believed! When you rise to [perform] prayer, wash your faces and your forearms to the elbows and wipe over your heads and wash your feet to the ankles..." [Quran 5:6]

Abu Hurayrah may Allah be pleased with him, narrated that he Prophet

said: “Allah does not accept the prayer of one who nullified his ablution until he performs it again.” [Al-Bukhari, Muslim, Abu Daawood and At-Tirmithi]
There is a consensus among the Muslim scholars that ablution is part of Islamic law. Therefore, it is a recognised fact of the religion.
There are many reports describing the manner in which the Prophet

perform ablution like this of mine, and he then said: "If anyone performs ablution like that of mine and offers a two-Rak'ah (units) prayer during which he does not think of anything else (not related to the present prayer) then his past sins will be forgiven." [Al-Bukhari]
There are matters scholars did not differ regarding their obligation, and other matters which they agree to the fact that they are recommended matters if neglected, one's ablution would still be valid. On the other hand there are matters over which the scholars have different opinions. In this article we will highlight the three categories.
Obligatory Acts of Ablution:
In light of the above-mentioned verse, ablution should have certain components which, if not fulfilled, make one’s ablution void. These are:
(i) Washing the face: This involves using the hands to pour or run water from the top of the forehead to the bottom of the jaws, and from one ear to the other.
(ii) Washing the arms to the elbows: The elbows must be washed, for the Prophet

did so.
(iii) Wiping the head: This means to wipe one’s head with wet hands. The apparent meaning of the Quranic words (which mean): “… and wipe over your heads…” [Quran 5:6] does not imply that all of the head needs to be wiped yet the way of the prophet

is what confirms this fact. Three different ways were recorded of how he

would wipe his head:
(a) Wiping all of his head: ‘Abdullaah Ibn Zayd may Allah be pleased with him reported that the Prophet

would wipe his entire head with his hands. He would start with the front of his head, then move to the back, and then return his hands to the front. [Ibn Maajah, Abu Daawood and others']
(b) Wiping over the turban only: Bilaal may Allah be pleased with him reported that the Prophet

said: “Wipe over your shoes and head covering.” [Ahmad]. It should be noted that the condition for wiping over the turban and socks is that prior ablution was performed before putting them on. Many Prophetic narrations have been related on this topic by Imaams Al-Bukhari, Muslim and others

.
(c) Wiping over the front portion of the scalp and the turban: Al-Mugheerah Ibn Shu’bah may Allah be pleased with him stated: "The Messenger of Allah

performed ablution and wiped over the front portion of his scalp, his turban and his socks." [Muslim]
There is, however, no strong Prophetic narration that clearly states that he

wiped over part of his head, even though the verse [Quran: 5:6] apparently implies it. It is also not sufficient just to wipe over locks of hair that proceed from the head or along the sides of the head.
(iv) Washing the feet and the heels: This has been confirmed in narrations from the Prophet

concerning his actions and statements. Ibn ‘Umar may Allah be pleased with him said warning against not properly and entirely washing the feet: “(Once), the Prophet

lagged behind us on one of our journeys. He caught up with us after we had delayed the afternoon prayer. We started to make ablution and were (only) wiping over our feet (and not washing them) when he

said: “Woe to these heels! Save them from the Hell-fire" repeating it twice or thrice.” [Al-Bukhari and Muslim]
Optional Aspects:
The following acts are not obligatory, yet, once done, are rewarded for since they constitute the way the Prophet

used to perform ablution:
1.     Brushing the teeth with a tooth-stick (Miswaak).
2.     Passing wet fingers through the beard.
3.     Passing the fingers of both hands against each other, and also passing them through the toes.
4.     Washing each limb three times.
Controversial issues:
There are certain issues pertaining to ablution which are controversial among Muslim scholars; some classify them as obligatory, while others classify them as optional. Such issues are:
1. Intention: This is the desire to do the action and to please Allah by following His command. It is purely an act of the heart, for the tongue (verbal pronouncement and so on) has nothing to do with it.
2.     Reciting the 'Basmalah' (saying: 'Bismillaah, i.e. 'In the name of Allah).
3.     Rinsing the mouth.
4.     Sniffing water into the nose and blowing it out.
5.     Following the prescribed sequence.
6.     Washing each part without pause, to ensure that no part dries up before the next step.
7.     Wiping the two ears (inside and outside).