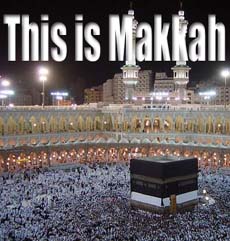 Honourable Makkah, the Secure City; Allah has distinguished it from among all places and made it sacred from the day He created the heavens and the earth.

Allah commanded Prophet Ibraaheem, may Allah exalt his mention, to build the first House on earth for Allah to be worshipped in at this spot and sent down the Black Stone from Paradise as a manifest sign of the sanctity of His Sacred House.
In Makkah springs the finest water on the surface of the earth, the water of Zamzam, which is food that suffices the hungry and a cure for the sick. It is the water with which the chest and heart of the chosen Prophet Muhammad

was cleansed in order to prepare him for his mission.
Allah has made Makkah eternally sacred and secure; He says (what means): “Have they not seen that We made [Makkah] a safe sanctuary, while people are being taken away (i.e. killed and taken captive) all around them?” [Quran 29:67]
Allah has sent down blessings and mercy upon Makkah, the likes of which have not been bestowed upon any other place or person on earth.
In order to make the matter clear, lest people confuse what is virtuous with what is not and what is sacred with what is not, the Lord sent down the angel Jibreel (Gabriel), may Allah exalt his mention, to point out the boundaries of the Sacred City, and Prophet Ibraaheem, may Allah exalt his mention, placed signs marking its boundaries. Furthermore, Allah commanded His messenger, Muhammad

to rebuild the structure of the House. This, indeed, is a clear sign and evidence manifesting the sanctity and holiness of this Secure City.
It was with the command of Allah that Prophet Ibraaheem, may Allah exalt his mention, proclaimed to the people the Hajj (pilgrimage) and Allah took it upon Himself to convey the sound of the call all around the world. Thereafter, the caravan of the honourable prophets, the righteous and those who followed them began to respond and come forth to the Sacred City. Prophet Moosaa (Moses), may Allah exalt his mention, the one who was honoured by the miracle of Allah speaking to him, came forth, as came Prophet Yoonus (Jonah), may Allah exalt his mention, the one who was swallowed by the whale, as well as a multitude of other prophets.
Makkah is the land where the Prophet Muhammad

was born and where his prophethood commenced. It is where he first received revelation; on the  peak of one of its lofty mountains lies the famous Cave Hiraa’ in which the Qur’aan was revealed to him

.
The honouring and sanctity of Makkah continued with the prophethood of Muhammad

conveyed to us that the Ka’bah was to be the direction which the Muslims should face during their prayers, and that a single prayer in the Sacred Mosque was to be equivalent to a hundred thousand in any other mosque.
He

guided the people to know that shedding blood (i.e., killing) in Makkah is prohibited as is felling trees and hunting, and that picking up lost items from its streets is prohibited, unless certain strict conditions are fulfilled.
The last and final Prophet

openly announced his love of Makkah and its lofty status in the sight of Allah when he said, addressing it: “I swear by Allah! You are the best of the lands of Allah and you are the most beloved land to Allah.” [At-Tirmithi and Ahmad]
How could we not glorify Makkah when it is a land that Allah Almighty has designated and singled out with the qualities of sanctity and of being glorified magnificently? How could we not glorify it when Allah has made it sacred, magnified the reward of performing good deeds in it, and has made its mention eternal by mentioning it in the Qur’aan? Allah says: (what means): “That [has been commanded], and whoever honours the sacred ordinances of Allah — it is best for him in the sight of his Lord” [Quran 22:30]
Allah also says (what means): “That [is so]. And whoever honours the symbols [i.e. rites] of Allah - indeed, it is from the piety of hearts” [Quran 22: 32]
The sacred ordinances and symbols (rites) of Allah refers to the Sacred City, the Sacred House of Allah, and sacred places within them, and it is due to their special qualities that Allah has distinguished them from all other cities and lands.
Honouring and glorifying the rites of Allah is accomplished by respecting this city, by realising its status and virtues, and by continually expressing gratitude upon seeing it, as well as by holding the matter of worshipping Allah within it in high esteem. This is so because the first House of worship ever to be built was in Makkah, and it is towards it that the hearts of the Muslims are directed from all places on earth. How can worship in it not then have such a high status and value?
Allah made the reward of performing acts of worship in it multiples of that performed elsewhere and made the reward of a single prayer in the sacred mosque equivalent to a hundred thousand prayers in any other mosque. Additionally, fasting, spending in charity and all other acts of virtue in Makkah have a much higher reward than anywhere else in the world, higher than any other act of worship could reach in value.