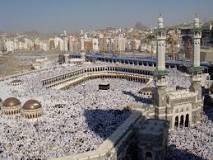 Hajj is the fifth pillar of Islam; Allah, The Exalted, ordained it in the ninth year after Hijrah (the Prophet's

migration from Makkah to Madeenah), according to the preponderant opinion.

Allah The Almighty Says (what means): {…And [due] to Allah from the people is a pilgrimage to the House—for whoever is able to find thereto a way. But whoever disbelieves—then, indeed, Allah is free from need of the worlds.} [Quran 3:97]

Hajj is obligatory once in a lifetime on every sane Muslim who has reached the age of puberty and is physically and financially capable of performing it. It is one of the best deeds that draws the person closer to Allah, the Exalted. There are many authentic Ahadeeth that were narrated concerning the virtues of Hajj, and we will mention some of them.

said, “I said, ‘O Messenger of Allah! We find Jihaad to be the best of deeds. May we (i.e. women) participate in it?’ He replied: ‘The best Jihaad for you (i.e. women) is an accepted Hajj.’" [Al-Bukhari and Muslim]

said: "The ‘Umrah to the following ‘Umrah expiates the sins committed in between them, and there is no reward for an accepted Hajj except Paradise.” [Al-Bukhari and Muslim] The accepted Hajj is the one in which one does not commit sins.

saying: “Whoever performs Hajj for the Sake of Allah during which he neither has sexual relations (with his wife) nor commits sins will return (after Hajj, as sinless) as he was on the very day his mother gave birth to him." [Al-Bukhari and Muslim]

After learning about the great reward of Hajj, in addition to it being one of the pillars of Islam, no Muslim should miss out on it; rather, he should hasten to perform it as soon as he is capable of doing so. This is because one does not know when he will die, and he should take advantage of his life before his death. We seek the Help of Allah to enable us to do good.

The Pilgrims' Chant (The Talbiyah):

Allah, The Exalted, Says (what means): {And proclaim to the people the Hajj [pilgrimage]; they will come to you on foot and on every lean camel; they will come from every distant pass.} [Quran 22:27]

completed building the Sacred House, Allah The Almighty Ordered him to call the people to Hajj. Ibraaheem

said, "O Lord, my voice will not reach them?'' Allah The Almighty Says, "Call them, and I will make it reach them.'' So Ibraaheem

ascended the mountain of Abu Qubays and said, "O mankind! Your Lord has established a House, so come for pilgrimage to it.'' It is said that the mountains lowered themselves so that his voice would reach all the corners of the earth, and those who were still in their mothers' wombs and their fathers' loins would hear the call. The response came from everything that heard him, from stones, trees, and those for whom Allah has decreed to make Hajj, until the Day of Resurrection: "We answer your call, O Allah, we answer your call."

"Come to you on foot," means that they will walk to perform the Hajj, as Ibraaheem and Ismaa‘eel, may Allah exalt their mention, performed pilgrimage walking on foot. Also, Al-Hasan ibn ‘Ali performed the Hajj twenty-five times on foot while there were camels with him. Imam Ahmad ibn Hanbal

A Story and a Lesson Learned:

set out for Hajj and intended to recite the Talbiyah, the color of his face changed, and his body trembled. It was said to him, “What is wrong with you?” He said, “I intend to say the Talbiyah, but I fear I would hear something else (other than the response to the Talbiyah).”

I was in Thul-Hulayfah and I saw a young man who wanted to assume the state of Ihraam, so he said: "O Allah, I want to say 'Labbayka Allahumma Labbayk' (O Allah, here I am at Your service), but I am afraid that You answer me by saying that my Talbiyah is not accepted." The man kept repeating this while shedding tears, then he said, "O Allah, I respond to Your call." He said this with a prolonged pronunciation, and he died on the spot

stood at ‘Arafah while other pilgrims were invoking Allah The Almighty, he was crying like a bereaved mother who lost her child and could not even supplicate Allah The Almighty. When it was almost sunset, he clutched at his beard and raised his sight to the sky and said, "O Allah, how ashamed I am of my sins before You, even if You have forgiven me!”

The Story of Building the Sacred House:

took Ismaa‘eel and his mother Haajar and went to the place of the Sacred House. When they reached Makkah, he made her sit under a tree at a place near Zam Zam where neither people nor water could be found. He left them there and left a water-skin containing some water and a bag of dates with them and went away. Ismaa‘eel’s mother followed him and asked: "Are you going to leave us in this valley where nobody lives?" She repeated the question but he ignored her, so she asked: "Did Allah order you to do so?" He answered: "Yes." She said, 'Then He will not let us go to waste.' She returned to her place and Ibraaheem went away until he reached a place where they could not see him; he faced the place of the House, raised his hands, and supplicated Allah Saying (what means): {Our Lord, I have settled some of my descendants in an uncultivated valley near Your sacred House, our Lord, that they may establish prayer. So make hearts among the people incline toward them and provide for them from the fruits that they might be grateful.} [Quran 14:37]

said: "That is why people perform Sa‘y between them (meaning As-Safa and Al-Marwah).”

When she was near Al-Marwah, she heard a voice, so she kept silent to make sure of it. It was the angel Jibreel (Gabriel)

and he hit the earth with his heel or with his wing, so water gushed out. Ismaa‘eel’s mother was astonished and collected the sand around it to make a basin. She drank from the water and suckled her child, and the angel said to her: "Do not be afraid of being neglected, for this is the House of Allah that will be built by this boy and his father, and Allah never neglects His people." [Al-Bukhari: Kitaab Al-Anbiyaa’]

How great is reliance on Allah, and how beautiful is submission to the Orders of Allah. Haajar was subjected to a hard plight, but her trust in Allah was not shaken, and then Allah sent the solution and the water of Zam Zam gushed out, so Haajar, her son Ismaa‘eel, and his descendants became a large Ummah (community), and the seal of the Prophets and Messengers (Prophet Muhammad

) was from his descendants. This small blessed family became the core of life and the origin of prosperity in this place. Days passed and Allah ordered Ibrahim to build the Sacred House. So, Allah responded to Ibrahim's supplication and the hearts of people became inclined to this House. The Sacred House continued to be under the protection of Allah and continued to be treated with glorification, honor and respect throughout all times and generations.