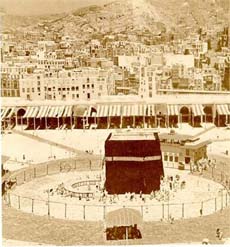 Makkah is the SacredCity as well as the holiest and the absolutely most honourable place on earth. The most truthful sources from which one can take news about its history are the Noble Quran and the authentic prophetic narrations in this regard, and from these we can ascertain its ancient history as well as how it was prior the message and prophethood of Muhammad

.
After the advent of Islam, Muslim scholars and historians have endeavoured to record chronicles of Makkah in general history books as well as books concerned with the biographies of the Muslim scholars who lived in it. Some scholars authored books that dealt primarily with its history and the areas surrounding it, one of the most famous being “Chronicles of Makkah and its Ancient Monuments” authored by Abu Al-Waleed Al-Azraqi

from the third century AH. Another book was “Chronicles of Makkah in Ancient and Contemporary Times” authored by Al-Faakihi

but the initial parts of his book were lost over time.
Thereafter, chronicling the affairs and events of Makkah ceased for a period of almost four centuries. It was thereafter resumed and one of the scholars who is considered to be the most prolific author regarding it and its history was Imaam Taqiyyud-Deen Al-Faasi Al-Makki

(775 AH - 832 AH). In his book entitled “The Therapy for those who Harbour Affection for the History of the Sacred City”, Imaam Taqiyyud-Deen

.
This incited him to write many publications on the history of Makkah that took different sizes; large, medium and small. One of the largest books he authored was “The Treasured Necklace on the History of the SecureCity” which consisted of eight volumes. Next in size came “The Therapy for those who Harbour Affection for the History of the Sacred City” which consisted of two volumes, which he later summarised in books such as “The Gift for the Honourable on the History of the Sacred City” and others.
Thereafter, many scholars and schools of history arose which contributed to the writing of the history and chronicles of Makkah such as, Aal Fahd and Aal At-Tabari, and this has continued ever since, to include the contemporary.
The establishment of Makkah:
The history and building of Makkah is directly connected to Prophet Ibraaheem (Abraham), may Allah exalt his mention, as he was the first person to settle his family in it when he left his wife Haajar and his son Ismaa’eel (Ishmael), may Allah exalt his mention, there in compliance with the command of Allah for him to do so.
Imaam Al-Bukhari

reported on the authority of Ibn ‘Abbaas, may Allah be pleased with him, in the long narration in which the Prophet

) informing us that the House (the Ka’bah) was built before Ibraaheem, may Allah exalt his mention, and whoever states that, relying upon this verse (for evidence of that), has no basis for such a claim because what is meant by the verse is that he was simply being informed of where the House was to be built.” In Volume 2 page 227 of the same book, he said: “The verses of the Qur’aan clearly indicate that Ibraaheem was the first person to build it.”
Abu Tharr, may Allah be pleased with him, narrated: “I asked the messenger of Allah: `O messenger of Allah! Which mosque was the first built on earth?` He

said: “The Aqsaa mosque (in Jerusalem).” “Thereupon, I asked: `What was the period between the building of the two mosques?` He

replied: “Forty years.”" [Al-Bukhari]
These reports clearly highlight the virtue of Prophet Ibraaheem, may Allah exalt his mention, and confirm that he was the one who built the two mosques, and that the period between the two was forty years.
Therefore, it becomes evident that the first thing to be established in Makkah was the Sacred Mosque (i.e. the Ka’bah), and that the first water to gush forth from it was Zamzam.
Thereafter, the offspring of Ismaa’eel, may Allah exalt his mention, multiplied in the area of Hijaaz (the province in which Makkah lies) and its surroundings, and their families succeeded each other in caring for the Sacred House and maintaining it for a long period of time, until the tribe of Khuzaa’ah took over this responsibility. People remained upon the monotheism with which Prophet Ibraaheem, may Allah exalt his mention, came until the time when, ‘Amr bin Lahy Al-Khuzaa’i introduced idol worshipping in the Ka’bah.
The number of idols then increased in the Ka’bah and this phenomena spread all around the Arabian Peninsula to the extent that the number of idols in the Ka’bah reached three hundred and sixty, as stated by Al-Kalbi in his book “The Idols”.
Due to numerous wars and tribal struggles, the well of Zamzam was buried and people could no longer find it. Qusay bin Kilaab, a great-grandfather of the Prophet Muhammad

forcefully took over the custody of caring for the Sacred House and maintaining it from the tribe of Khuzaa’ah, as it had abused its authority. Qusay gathered the scattered families of the Quraysh tribe, relocated them in Makkah, and restored the sanctity of Makkah, which had been lost due to Khuzaa’ah's misuse of  authority and because some of the Quraysh tribe had been placed in the surrounding areas of Makkah in order to protect it.
This marked the beginning of an authority that glorified Makkah and which freely offered all types of services to its visitors, such as food, water and the cleaning and maintaining of the Ka’bah.
After ‘Abdul-Muttalib saw a dream in which he saw the exact spot of the buried well of Zamzam, he had the area dug up and restored the well. Thus, the well of Zamzam once again became the source of water to the pilgrims and visitors, as well as to the residents of Makkah.
After this, a grave event took place during the time of ‘Abdul-Muttalib when Abrahah the Ethiopian headed towards Makkah riding a huge elephant in order to demolish the Ka’bah. This is why that year came to be known as “The Year of the Elephant”, during which the Prophet

was born.
A city with such a magnificent history is worthy of having such an exalted status and should, therefore, be glorified and honoured. It deserves to occupy a special place in the hearts of its residents, as well as the Muslims in general.