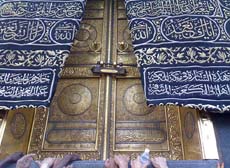 The value of glorifying the Sacred City:

The importance of values lies in the fact that they are the criterion by which people, ideologies, actions, positions and subjects can be judged and measured; moreover, values decide the identity of the community; the values in a given community have a direct effect and influence on the manners and conduct which the members of that community adopt.
Whenever the values of a community originate from the teachings of its faith, the behaviour and conduct of its people will reflect such a faith and they will certainly enjoy fine and fulfilling lives within their respective communities.
Strengthening the social values that Islam instructs and emphasises upon is the safety valve that protects and guards the community, and one of the greatest and most important of such values is to glorify the symbols of Allah. Indeed, such glorification results in lofty social customs and etiquettes that guarantee the stability of the Muslim community and assures happiness in this life and the Life to come.
Allah Almighty has made this city a Sacred and Secure one and has honoured His House (the Ka’bah); He made glorifying this city one of the most honourable acts of worship by which a person draws close to Allah; He says (what means): “That [is so]. And whoever honours the symbols [i.e. rites] of Allah — indeed, it is from the piety of hearts.” [Quran 22: 32]
Glorifying what Allah and His Messenger

have glorified results in establishing great social values that will yield countless benefits to the Muslims, and will reflect the unity of the Muslims - a nation that direct themselves to one Qiblah (direction during prayer towards Ka’bah), believe in one religion and harbour the same objectives and hopes, as if their hearts are that of a single person.
The Prophet

taught us how to build this value of glorifying Makkah - since his prophethood started in Makkah itself - in a practical manner that is away from fantasy and in a realistic manner that is easy to comprehend, and made it deeply rooted in the hearts in a way that guaranteed the continuity of such glorification by those who reside in the Sacred City and those who come to visit it. He did so with great wisdom and with tender care which caused people to long to see and glorify this SacredCity.
Words and actions that reflects its love:
Imaam Al-Bukhari

reported on the authority of ‘Aai`shah, may Allah be pleased with her, that she said: “When the Prophet

came to Al-Madeenah, both Abu Bakr and Bilaal became sick. Whenever fever attacked Abu Bakr, he would recite the following verses of poetry:
A person wakes up among his household-active he is
While death is in fact closer to him than his shoelaces
Whenever fever eased from Bilaal, he would recite the following verses of poetry:
Will I ever again go back to spend a night- only once
In the valley with Ith-khir and Jaleel (plants) in abundance?[1]
And will I one day again drink from the water of Mijannah? [2]
And will again see (the mountains of) Tafeel and Shaamah? [3]
Then he would say: ‘O Allah! Curse Shaybah Ibn Rabee’ah and ‘Utbah Ibn Rabee’ah and Umayyah Ibn Khalaf as they forced us from our land to a land full of diseases’. Then the Prophet

said: “O Allah! Make Al-Madeenah dear to our hearts just like you made Makkah dear to our hearts, and even more so. O Allah! Bless our Saa’ and our Mudd [4] and make it a healthy place for us, and move its fever to the area of Al-Juhfah.” Bilaal, may Allah be pleased with him, also said: 'We arrived at Al-Madeenah and it was a land full of diseases as the valley of Bathaan would have putrid water running through it.'”
Ibn ‘Abbaas may Allah be pleased with him, narrated: “The Prophet sallallaahu 'alayhi wasallam said, addressing Makkah: “How good you are as a landand how dear you are to my heart! Had your people not forced me out of you, Iwould have never come out and left you and would have never resided in any othercity but you].” At-Tirmithi and Ibn Hibbaan]
Ibn ‘Abbaas, may Allah be pleased with him, narrated: “When the Prophet

was forced to leave Makkah he headed out to a cave, turned around, and said, addressing Makkah: “You are the most beloved land to Allah, and you are the most beloved land to me. Had the polytheists not forced me out of you, I would never have come out and left you. The worst enemy is the one who transgresses the sanctities of Allah, or kills a soul without due right or kills a soul as revenge from the era of pre-Islamic ignorance.” Then Allah revealed the following verse (which means): “And how many a city was stronger than your city [i.e. Makkah] which drove you out? We destroyed them; and there was no helper for them.” [Quran 47:13]” [Ibn Jareer At-Tabari] Imaam Al-Qurtubi

said: “This is an authentic narration.” [End of quote]
Imaam At-Tirmithi, Ahmad and ‘Abd bin Humayd

reported that ‘Abdullaah bin ‘Adiyy Ibn Al-Hamraa’, may Allah be pleased with him, narrated: “I saw the Prophet

standing on a hillock [5]  and addressing Makkah, saying: “I swear by Allah! You are the best of the lands of Allah and you are the most beloved land to Allah, and had it not been that I was forced to leave you, I would have never left you.”
ImaamAl-Faakihi

sent ‘Itaab bin Usayd as a leader for the people of Makkah and said to him: “Do you know where I am sending you? I am sending you to the people (dear to) Allah. There is no city dearer to Allah - the Almighty, the Glorified - and to myself than this city, and had it not been that its people forced me out of it, I would never have left it.”
This is Makkah and this is its virtue. Will we win the honour of glorifying it and loving it with its due love and glorification?
Footnotes: [1] Jaleel: a weak plant that the residents of Makkah would use in their homes.
[2] Mijannah: a place that was a few kilometres from Makkah which had a market.
[3] Shaamah and Tafeel: Two mountains about 50 Km from Makkah.
[4] Saa' and Mudd:  measures of weight for food
[5] This small hill was at the lower end of the market overlooking Makkah.