The value of glorifying the Sacred City 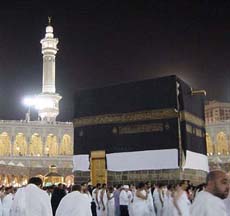 Whenever the values of a community originate from the teachings of its faith, the behaviour and conduct of its people will reflect such a faith and they will certainly enjoy fine and fulfilling lives within their respective communities.
Strengthening the social values that Islam instructs and emphasizes upon is the safety valve that protects and guards the community, and one of the greatest and most important of such values is to glorify the symbols of Allah. Indeed, such glorification results in lofty social customs and etiquettes that guarantee the stability of the Muslim community and assures happiness in this life and the Life to come.
Allah Almighty has made this city a Sacred and Secure one and has honoured His House (the Ka’bah); He made glorifying this city one of the most honourable acts of worship by which a person draws close to Allah; He Says (what means): “That [is so]. And whoever honours the symbols [i.e. rites] of Allah — indeed, it is from the piety of hearts.” [Quran 22: 32]
Glorifying what Allah and His Messenger

have glorified results in establishing great social values that will yield countless benefits to the Muslims, and will reflect the unity of the Muslims - a nation that direct themselves to one Qiblah, believe in one religion and harbour the same objectives and hopes, as if their hearts are that of a single person.
Due to the great value that glorifying Honourable Makkah has in the hearts of the Muslims, it is a very easy task to attract diverse human resources to invest in a project that aims to glorify this great city, and for Muslims from different sectors within the Muslim community to cooperate in order to instill such glorification in the hearts and spread it amongst the people.
This was the initiating point for the project of 'Glorifying the SacredCity'. The project was derived from the texts of the Book of Allah that were revealed in Honourable Makkah and the Sunnah of His Prophet

, whose prophethood began in it.
The Prophet,

taught us how to build this value of glorifying Makkah - since his prophethood started in Makkah itself - in a practical manner that is away from fantasy and in a realistic manner that is easy to comprehend, and made it deeply rooted in the hearts in a way that guaranteed the continuity of such glorification by those who reside in the Sacred City and those who come to visit it. He did so with great wisdom and with tender care which caused people to long to see and glorify this SacredCity.
Under the sponsorship of his Royal Highness Prince ‘Abdul-Majeed Ibn ‘Abdul-‘Azeez, the Governor of the province of Makkah, on the fifteenth day of the month of Sha’baan, 1426 AH this project was initiated  in a celebration attended by many princes, government officials from different departments in the city of Makkah, mayors, neighbourhood chiefs and school principals.
The gathering included video footage and Islamic songs and was concluded with a speech delivered by his Royal Highness in which he announced the launching of the project and encouraged government officials and the residents of Makkah to support and partake in the project.
The project aims - through various committees, programs and advertisements - to revive the role of organizations and individuals in shaping the social behaviour of the Makkan community, raising people’s awareness about the status of Honourable Makkah and encouraging people to glorify it, so that this value and principle of glorifying Makkah becomes an influential tool that affects and directs people’s vision and strengthens community bonds, families, neighbourhoods and the Makkan community in its entirety.