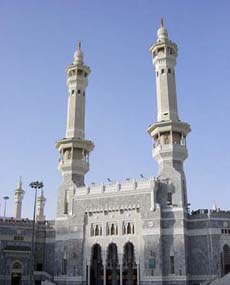 Hajj is one of the most prominent forms of worship in Islam. It is an embodiment of true following of the Prophet's

example. Unfortunately, it has recently become apparent that too much emphasis is being placed upon rulings pertaining to common mistakes committed by pilgrims during Hajj, and to what validates or invalidates this major ritual. The fact that these rulings are indeed important, even necessary (since the validity of Hajj is largely contingent on them) has made people forget other equally important aspects of the Prophet's

conduct during the Hajj. As a consequence, pilgrims nowadays perform many acts that do not exactly follow his guidance.
The main aim of this article is therefore, to give an accurate account of the Prophet's

acts of worship during Hajj, with the hope that this will help those who wish to accurately follow the Prophet's

acts of worship during Hajj
Educating and leading the pilgrims, as well as caring for his wives and household did not prevent the Prophet

from worshipping Allah, or from showing submissiveness to Him. This attitude took various forms, and here are some of the most significant examples:
1.     Realizing and enhancing Tawheed (Islamic monotheism)
Tawheed is one of the fundamental principles of Islam that the Prophet

realized and fostered. This was very evident in his conduct during the Hajj as it was in his recitation of Talbiyah (saying Labbayka Allahumma labbayk), which has become the Hajj motto. It means that the act of Hajj is offered to Allah, the One, Who has no associates. The Prophet

observed strict devotion in all his deeds. He

always asked Allah to help him avoid hypocrisy and showing-off. Anas, may Allah be pleased with him, reported that he heard the Prophet

say: "O Allah, make my Hajj (pilgrimage) free of hypocrisy and showing-off." [Muslim]
While he was on the hills of Safaa and Marwah, the Prophet

supplicated to Allah as narrated by Jaabir, may Allah be pleased with him, who said, "The Prophet

supplicated Allah on the Day of 'Arafah saying as narrated in the authentic hadeeth, "The best invocation is performed on the Day of 'Arafah, and the best supplication ever offered by me or by previous apostles is: Laa ilaaha illallaah. There are no associates to Him; He is the Owner of the universe, to Him we give thanks, He is the Omnipotent; there is-no god but Allah, the One." [Muslim]
2.     Repudiating the polytheists and insisting on acting differently from them
In many of the Hajj rituals, the Prophet

insisted on acting differently from the polytheists and on following in the footsteps of our father Ibraaheem, may Allah exalt his mention. This attitude was culminated by his rejection of their actions in the sermon he delivered on the Day of 'Arafah. "All Jaahiliyah (pre-Islamic) traditions are under my feet," the Prophet

declared. [Muslim] Some of the most important rituals that the Prophet

insisted on changing are as follows:
Talbiyah: The polytheists used to associate other gods with Allah when they said "Except one associate; he is yours; you own him and whatever he owns." [Al-Bukhari] The Prophet

made Tawheed (monotheism) pure, and cast away the association of other gods with Allah, repudiating such practice.
Another example of the Prophet's

insistence on acting differently from the polytheists is seen in his stopping with the pilgrims at 'Arafah, unlike the Quraysh who used to stop at Muzdalifah, saying: "We do not perform Al-Ifaadah (departure) except from Haram." [Al-Bukhari]
3.     His overwhelming supplication, invocation and humility to Allah
Supplication has a special status in Islam as it aims at expressing total submissiveness, surrender and humility to Allah. The Prophet

said: "Supplication is worship." [Abu Daawood] He used to per-form supplication during the Hajj more than at any other time. He would supplicate Allah, Almighty, in Tawaaf, and while standing on the hills of Safaa and Marwah. He also offered lengthy supplications on the Day of 'Arafah, riding on his camel back, raising his hands close to his chest as if he were a poor man begging for sadaqah (charity). He

would remain in that condition from the moment he had chosen the spot at which he would stop after salah (prayer) and until sunset. He

also did the same at Al-Mash'ar Al-Haraam (the Sacred Monument) in Muzdalifah right after he had offered the Fajr (dawn) prayer and almost until sunrise. [Al-Bukhari] On the Days of Tashreeq, and when he

had cast the first two jamaraat (pebbles), he would face Qiblah, raise his hands, and start a prolonged supplication. [Al-Bukhari and Muslim]