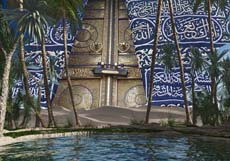 The manner in which the Prophet

treated his people during the Hajj is indeed astonishingly magnanimous. He

educated and led the masses simultaneously. It is needless to say that his deeds always measured up to his teachings. Every thing he

did was an indication of his greatness and nobility. Here are some examples:

as an educator who would made people's lives and acts of worship easier. He

undoubtedly, excelled in his mission. People bore witness that they had never experienced any type of education better than his. He

publicly announced his intention to perform the Hajj, in order to give those who wished to accompany him the opportunity to prepare themselves for the journey. The crowds flocked to Madeenah, hoping to learn from the Prophet

and to follow in his footsteps. [Muslim] Throughout the Hajj, he mingled with the pilgrims and appeared for the public all the times. [Muslim] Nobody was beaten or turned away from him [Ibn Maajah]. No one was mistreated or got hurt in his presence. [Muslim]
Having been keen on delivering the message in full, the Prophet

used various methods of discourse and education. He

reasoned with his people, urged them to learn, and made them listen to what he said and focus on what he did. He

in his Hajj. He

gave religious verdicts concerning issues on which he was asked. One famous fatwa (verdict) of his was given to a woman from Khath'am tribe who asked him if she could perform Hajj on behalf of her aging father. "He cannot ride his camel," she said. "Perform Hajj on his behalf," the Prophet

replied. [Al-Bukhari]
Furthermore, the answer he

gave to anyone who asked about postponing or bringing forward the rituals due on Slaughter Day was "Do it, no problem." [Al-Bukhari]
3.    Preaching
Allah sent Muhammad

to simultaneously warn people and to give them good tidings. The Prophet

excelled in preaching and in showing his followers the righteous path. He

urged them to do good and prohibited them from doing wrong.
The Hajj offered ample opportunity for preaching. Time and again he would remind the Muslims of some important rules. [Ahmad] He

tackled a number of vital subjects in his preaching. Here are some important examples:
He

ordered people to observe righteousness and to be religious. He

explained to them the deeds they should do in order to enter Paradise. "Obey your Lord," he

said in one of his sermons, "Offer your five prayers, observe the fast in the month of Ramadan, give Zakah (alms) due on your wealth, and obey your rulers so that you may enter Paradise." [Ibn Maajah]
He

made it clear that we are each responsible for our own deeds on individual basis before Allah. He

urged people to avoid disobedience and wrongdoing when performing their rituals. He

asked them to occupy themselves with only that which is useful. "He who performs the Hajj without any wrong doing," the Prophet

said, "will return free of all sins, like the day he was born."[Al-Bukhari]
4.    Unifying Muslims and warning them against trials and disunity
Despite all the feelings and emotions it represents for Muslims, the Hajj is a unique opportunity to unify and to warn the nation against trials and afflictions. The Prophet

gave great attention to this point. For instance:
He

declared that all Muslims are equal, and that Taqwa (fear of Allah) is the only basis for discrimination among them. "Your Lord is One," the Prophet

ordered complete obedience to the righteous ruler who adheres to the Book of Allah and to the Muslim congregation. In one of his sermons, he

exhorted the nation "If a black slave were made your ruler," he

said, "you should owe him allegiance and obedience provided that he adheres to the rulings of Allah's Book." [Muslim]
At the same time, he

warned against the intrigues of Satan saying "Satan has despaired of being worshipped by those who offer the prayer in the Arabian Peninsula, but not of scheming against them." [Ibn Maajah]
He

also warned against introducing heresies into the religion. He

said: "I am going to save people, and will be called upon to save people; I will say, ‘O Lord how about my companions?’ and He (Almighty) will reply: ‘You have no knowledge of what they introduced after your death.’”[Al-Bukhari]
Further, he

warned against all that may cause trials and dissention in Muslim society, such as fighting among Muslims. Having asked pilgrims to keep quiet, the Prophet

said: "Never revert to disbelief after my death, killing each other." [Al-Bukhari]
He

warned people against indifference for Muslim's blood, possessions and other sanctities. In his sermons on the days of 'Arafah, Nahr (slaughter) and on the second day of Tashreeq, the Prophet

warned: "Your blood, your possessions and your sanctities are all as sacred as this day of yours, as this month of yours, and as this land of yours." [Ahmad]
5.    Preaching submission to Allah and unifying the sources
Islam means total submission and humility to Allah Alone on the one hand, and observance of the teachings of the Prophet

on the other. Being a true Muslim requires undisputed submission to the divine revelation. The Hajj represents submission par excellence. It is a school of surrender to the will of Allah. The Prophet

told his companions, may Allah be pleased with them, to unite in following his example and emphasized the necessity for adhering to his teachings. "The Prophet is with us," Jaabir, may Allah be pleased with him, reported, "and the divine inspiration is being revealed to him. He knows best how to interpret it, and whatever he does, we will follow in his foot-steps." [Muslim] The outcome of this excellent education was enormously successful and blessed by Allah, Almighty.
On many occasions, the Prophet

ordered his companions to follow his example when he mentioned that it might well be the last time he performed Hajj. "Learn your rituals from me," he

said: " I'm not sure that I will perform Hajj again." [Muslim]
In his sermon delivered on the Day of 'Arafah, the Prophet

urged the pilgrims to hold on to the Quran and its teachings as the only way to deliverance from sins. "I have left you with the Quran," he

said: "you will never go astray if you adhere to it." [Ibn Maajah]
The Prophet

warned against following personal whims and introducing heresies into the religion. Addressing the pilgrims from the back of his she-camel at 'Arafah, he

said: "I will beat you to the Hawdh (water fountain), and with your numbers I will compete with other nations. Do not let me down; I will be saving people, and will be called upon to save people. I will say ‘O Lord, what about my companions?’ Allah (Almighty) will reply, ‘You have no knowledge of what they introduced after your death.’" [Mukhtasar As-Seerah]