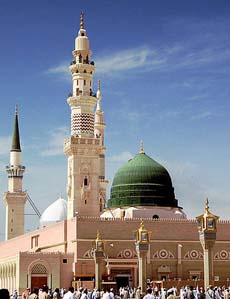 said: “You should not undertake a special journey to visit any place other than the three Mosques: the Sacred Mosque of Makkah, this  Mosque of mine, and Al-Aqsa Mosque (in Jerusalem).”  [Al-Bukhari]

Another narration has the following phrasing: “For three mosques a special journey may be undertaken: The Sacred Mosque (Ka'bah), my Mosque, and the Mosque of Al-Quds (Jerusalem)”.
Abu Tharr, may Allah be pleased with him, reported that he asked the Prophet

: “O Prophet of Allah, which mosque was built first on earth”?   The Prophet

replied:“The Sacred Mosque of Makkah”.  Abu Tharr, may Allah be pleased with him, again asked: “Which was next?”  The Prophet

said: “Al-Aqsa Mosque.”  “How long was the period between them?”  Abu Tharr, may Allah be pleased with him, asked.  The Prophet

said: “Forty years.  Apart from these, offer your prayers anywhere when it is time to pray, although excellence is in praying in these Mosques.”
Traveling to these three Mosques is prescribed because of their special position in Islam.  Jaabir, may Allah be pleased with him, reported that the Prophet

(in Madeenah).
Etiquette of visiting the Prophet’s Mosque and grave:
1- It is recommended that one should approach the Prophet’s Mosque calmly and with composure.  One should wear perfume, put on a nice clean dress and enter the mosque with the right foot, and say: “I seek refuge with Allah, the Supreme, with His Noble Face, and with His Eternal Dominion from the accursed devil. In the Name of Allah, O Allah! Bless Mohammad, his family and his followers. O Allah! Forgive my sins, and open the doors of Your mercy for me.”
2- It is also recommended to go first to the Rawdhah (the place between the pulpit and the grave) and offer there two Rak’ahs as greetings to the Mosque with calm and humility.
3-  After this, one should head toward the grave of the Prophet

face it, and with the back to the Qiblah, give greetings of peace to the Prophet

.  At this, he, may Allah be pleased with him, told them: “Had I known that you are from this city, I would have punished you”.
7-   Avoid wiping hands on the chamber (i.e., the grave of the Prophet

), or kissing it.  The Prophet

has forbidden all such things.
Abu Daawood

reported from Abu Hurayrah, may Allah be pleased with him, that the Prophet

said: “Do not turn your houses into graves. Nor make my grave a place of festivity.  Send your greetings upon me, for your greetings are conveyed to me wherever you are.”
Abdullaah Ibn Hasan

saw a man frequenting the grave of the Prophet

and making supplications there.  Thereupon he told him, O, so and so, the Prophet

has said: “Do not make my grave a place of festivity, but send your greetings upon me from wherever you happen to be, for your greetings are conveyed to me.”
In this respect, there is no difference between you and a man from (a distant country like) Andalusia.
Excellence of prayers in the Rawdhah
Narrated Abu Hurayrah, may Allah be pleased with him, that the Prophet

said: “The space between my house and my pulpit (which is the Rawdhah) is one of the gardens of Paradise, and my pulpit is at my Fountain”   [Al-Bukhari]
Offering prayers in the Mosque of Qubaa':
The Prophet

used to go there, riding or on foot, every Saturday and offer a two-Rak’ah prayer.  He

advised others to do the same, saying: “Whoever makes ablutions at home and then goes and prays in the Mosque of Quba, he will have a reward like that of an ‘Umrah.”   [Ahmad and others]