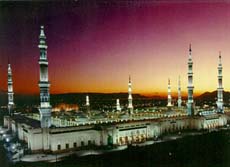 Things to keep in mind

Before leaving to Madeenah, it is good to learn and keep in mind a few points that will help you maximize your benefits during your stay at the Prophet's Masjid:
There is a well known narration in which the Prophet

is reported as having said: "The person who offers 40 consecutive prayers in my Mosque, without missing a prayer, will be spared the torment of Hellfire, and other torments, as well as hypocrisy." [Ahmad]
These 40 prayers (which require eight days) will be equal in reward to forty thousand prayers, which, if one were to make them somewhere else, would take him/her more than twenty two years. No one should miss such reward. One must do his/her best to make as many prayers as possible in the Prophet's Mosque.
Visiting Qubaa’ Mosque and Al-Baqee’ cemetery
It is highly recommended for those visiting Madeenah to visit the Mosque of Qubaa’ and perform prayer in it. This has been reported in a few narrations from the Prophet

. ‘Abdullaah Ibn ‘Umar, may Allah be pleased with him, narrated that the Prophet

used to visit the Mosque of Qubaa’ and offer two Rak'ahs (units of prayer) in it. Also, Sahl Ibn Haneef, may Allah be pleased with him narrated that the Prophet

said: "Whoever makes ablutions in his home then goes to the Mosque of Qubaa’ and performs prayer in it, will attain a reward equal to that of performing an ‘Umrah." [Ahmad and An-Nasaa’i]
Similarly, it is in accordance with the Sunnah to visit Al-Baqee' graveyard. The Prophet

used to visit Al-Baqee' and supplicate for those buried there. He

used to tell his Companions, may Allah be pleased with them: "Visit the graveyards, for they remind you of the Hereafter." [Muslim]
He

also taught them to recite the following supplication when visiting the graves: "Assalaamu ‘alaykum ahlad-diyaari minal mu’mineena wal muslimeen, wa innaa inshaaAllahu bikum laahiqoon. Nas'alullaaha lanaa wa lakumul ‘aafiyah," meaning: "O dwellers of those places of the believers and Muslims, Assalaamu alaykum. We are, if Allah wills, about to meet you. We ask Allah to grant us and you peace and security." [Muslim]
Overtime, thousands of Companions of the Prophet

and many good Muslims were buried there.
Visiting graves reminds us of the Hereafter. It also provides us with an opportunity to help the dead who can no longer help themselves, by invoking Allah's mercy and forgiveness for them. This is the least we can do for them in return, especially if they are among the good and pious Muslims who did a lot of work to serve our religion.
Other places to see
When in Madeenah, it is highly recommended to visit two Mosques (the Prophet's Mosque and the Qubaa’ Mosque); and three graves (the grave of the Prophet

Abu Baker’s and Umar's, may Allah be pleased with them; the Baqee' and Uhud). Beyond that, one may visit any of the historic sites in or around Madeenah to learn history, and to appreciate the role of Madeenah even more. One must make sure not to act, while visiting any site, in a way that has no bases in the Sunnah of the Prophet

. It is unfortunate that there are many who practice un-Islamic and unfounded rites at these sites. The following is a short list of the sites that are worth visiting and learning about:
Battle of Badr Site
The plain of Badr is about 20 miles south west of Madeenah where the first battle between Muslims and Quraysh of Makkah took place in the year 2 A.H.
Mountain of Uhud
The Messenger of Allah

said about this mountain which is located three miles to the north of Madeenah: "Uhud is a mountain that loves us and we love it." (At-Tirmithi) The Battle of Uhud took place at the foot of Uhud in the year 3 A.H. Hamza, the Prophet's uncle, as well as other Companions, were buried there.
Masjid Al-Qiblatayn
It is situated to the north-west, near the valley of Al-‘Aqeeq. In this Mosque, revelation came down directing Muslims to change the Qiblah from Baytul Maqdis (Al-Masjid Al-Aqsa in Jerusalem) to the Ka'bah in Makkah. It is because of this incident that this Mosque was named: the Mosque of the two Qiblahs (Masjid Al-Qiblatayn).
Masjid Al-Ghamaamah
Al-Ghamaamah is Arabic for: cloud. This Mosque is located near-by the Prophet's Mosque. The Prophet

used to offer ‘Eed prayer in it. One day, the Prophet

was leading a prayer of Istisqaa’ (prayer for rain) in it, when suddenly clouds appeared and it started to rain, hence the name Al-Ghamaamah, or the cloud was coined.
Masjid Al-Ahzaab or Masjid Al-Fath
It is on the western corner of Jabal Saala'. When a confederation (Ahzaab) of enemies attacked and besieged Madeenah, the Muslims dug a trench to defend the Madeenah. Today, there are six Mosques at this place.
Masjid Banu Quraydhah
This one is not far from Masjid Al-Fath; it is located to the east of it. The Messenger of Allah

had camped there during the siege of the Jewish tribe of Banu Quraydhah.
Conclusion
Madeenah has a distinguished place in the hearts of Muslims. They love to visit it often, but most of them, and mostly for financial reasons, would not be able to make the trip to Madeenah more than once in their lifetime. It is so essential that everyone makes the most of his/her visit. The best preparation starts with learning authentic and correct knowledge ahead of the trip; staying focused on the purpose of the visit while in Madeenah; feeling and strengthening our love for Allah and His Messenger

; and by concentrating on our worship so that we return from the great trip as better Muslims.