Hajj and the Muslims’ Unity 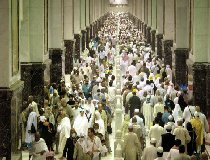 Unity and agreement lead to strength and victory, while disunity and disagreement lead to weakness and defeat. Powerful nations only succeeded because of unity among its members and integration of its efforts. History is the best witness to this rule. Hence, we find several texts in the Quran and the Sunnah stressing this great principle and warning against disagreement and dispute. Allah The Almighty Says (what means): {And obey Allah and His Messenger, and do not dispute and [thus] lose courage and [then] your strength would depart; and be patient. Indeed, Allah Is with the patient.} [Quran 8:46]

used to place his hand upon our shoulders at prayer time (when we would form rows for the prayer) and say, ‘Stand in straight rows and do not differ among yourselves, or else your hearts will differ (due to disaccord).'” [Muslim]

Hajj is a great occasion where the Muslims’ unity appears in its most beautiful forms. All differences disappear, all barriers melt and Muslims gather in this imposing scene, which delights the souls and hearts.

Muslims from all over the world gather around this Ancient House, towards which they turn to perform the prayers five times a day, the House towards which they turn their souls and hearts during prayers in their faraway lands. Now, they gather around it to see, consult, love, and shake hands with each ‎other. They took off those different and distinguishing clothes to wear a white uniform indicating the whiteness of their hearts, as well as the purity of their appearance and souls.

Indeed, these are magnificent moments when all pilgrims move from Mina to stand this great standing in ‘Arafah confirming the unity of place, time, clothes and destination.

There are unanimous manifestations of unity in Hajj, including:

-     Unity of place and time: Hajj is performed in a specific time and place and it is impermissible to be performed at any other time or in any other place. Allah The Almighty Says (what means): {Hajj is [during] well-known months, so whoever has made Hajj obligatory upon himself therein [by entering the state of Ihraam], there is [to be for him] no sexual relations and no disobedience and no disputing during Hajj…..} [Quran 2:197]

said: “Hajj is the standing at ‘Arafah.” [At-Tirmithi]

-     Unity of rituals: All pilgrims are required to perform the rituals of Hajj including Ihraam, Tawaaf, Sa‘y between the Safa and Marwah, standing at ‘Arafah, spending the night at Mina, stoning the Jamraat and so on.

All pilgrims perform the same rituals, the thing that embodies and deepens brotherhood and love among them.

-     Unity of aim and feeling: All pilgrims come from every distant pass hoping for the Mercy of Allah The Almighty, fearing His punishment and raising their hands to implore Him and ask for His forgiveness, bounty and satisfaction.

They have one Qiblah, one Lord, similar feelings and similar clothes. These manifestations of unity that take place in this blessed occasion maintain the feeling of unity and reinforce the feeling of brotherhood among Muslims. They also strengthen mutual sympathy and sharing in joy in addition to religious and worldly cooperation among Muslims.

This was a brief overview of this important issue that occupy the minds of all Muslims, who aspire to a time when the Muslim nation will reunite to achieve superiority over the other nations and restore its leadership that the Muslims lost because of disunity and disagreement. Allah The Almighty Says (what means): {Allah Has Promised those who have believed among you and done righteous deeds that He Will Surely Grant them succession [to authority] upon the earth just as He Granted it to those before them and that He Will Surely Establish for them [therein] their religion which He Has Preferred for them and that He Will Surely Substitute for them, after their fear, security, [for] they worship Me, not associating anything with Me. But whoever disbelieves after that - then those are the defiantly disobedient.} [Quran 24:55]