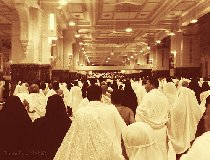 These are the two famous mountains/hills that are located in Al-Masjid Al-Haraam (the Grand Mosque) in Makkah. As-Safa was once connected to the mountain of Abu Qubays, while Al-Marwah was connected to the mountain of Qu‘ayqi‘aan. However, during the expansion process in Al-Masjid Al-Haraam, As-Safa and Al-Marwah were separated from them and became encompassed inside the mosque after having been outside of it.

The distance between As-Safa and Al-Marwah is about 400 m, and in the middle of the Mas‘a [the place where pilgrims perform Sa`ee (walking) between As-Safa and Al-Marwah] there are green lights that cover about 55 m. These lights are used to make people aware from which point the jogging starts and where it ends. This very distance is where Haajar, the wife of Prophet Ibraaheem, may Allah exalt his mention, fast walked in her search for water. Muslim men, and not women, should fast walk this distance.
The Sa‘ee between As-Safa and Al-Marwah is one of the pillars of Hajj and ‘Umrah (lesser pilgrimage); Allah The Exalted says (what means): {Indeed, As-Safa and Al-Marwah are among the symbols of Allah. So whoever makes Hajj to the House or performs ‘Umrah – there is no blame upon him for walking between them. And whoever volunteers good – then indeed, Allah is Appreciative and Knowing.} [Quran 2:158] It was reported in Saheeh Al-Bukhari on the authority of Jaabir, may Allah be pleased with him, that the Prophet,

, performed Sa‘ee between them seven times during his Farewell Hajj.
The story of Sa‘ee between As-Safa and Al-Marwah can be traced back to the time of Ibraaheem, may Allah exalt his mention. In fact, performing Sa‘ee serves to commemorate and honor the story of Haajar's search for water for her child. Prophet Ibraaheem, may Allah exalt his mention, was commanded by Allah The Almighty to leave his wife Haajar and their infant son, Ismaa‘eel, may Allah exalt his mention, alone in a barren valley, where there were not any water or trees, to test their faith. Ibraaheem, may Allah exalt his mention, obeyed the command of his Lord and left his wife and infant there with only a few provisions of food and water. However, they soon ran out of water and the baby started crying out of extreme thirst. The tender heart of his loving mother ached and she feared for her child, so she went in search of water. She first climbed the nearest hill, As-Safa, to look for any help in the surrounding area. When she saw nothing, she then went to the other hill, Al-Marwah, to look around. She did this seven times. Finally, while she was on Al-Marwah, she looked at her son only to see a spring of water sprouting forth beneath his feet. She was thrilled and ran towards her child and fastened her hands so as to prevent the water from spreading saying, “Zim … Zim” (an Arabic word that means "gather around").Thus, Allah The Exalted revived this blessed family, or rather revived this blessed valley as some Arab tribes settled in it (as it now had a source of water - the Zamzam Well).
The supplications of Ibraaheem, may Allah exalt his mention, were answered; Allah The exalted informed us that Ibraaheem supplicated to Him saying (what means): {Our Lord, I have settled some of my descendants in an uncultivated valley near Your sacred House, our Lord, that they may establish prayer. So make hearts among the people incline toward them and provide for them from the fruits that they might be grateful.} [Quran 14:37]