Merits of Al-Madeenah An-Nabawiyyah (The Prophetic City) - I 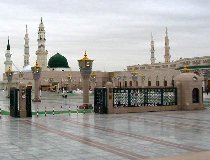 It is Taybah and Taabah and ‘The Abode.’ These are some of the names given to Madeenah of the Messenger of Allah,

. Its being the abode goes back to the safety and stability one finds in it. Both Taybah and Taabah refer to the good and pleasant smell. Thus, it is secure and stable, of good living and pleasant residence. It is the abode of his Hijrah (emigration), and the homeland of his state, therefrom the light (of Islam) spread and extended over all parts of the world. The Prophet,

, loved it dearly, and so did his Companions, may Allah be pleased with them, from among the Muhaajiroon (emigrants) and the Ansaar (their helpers) so much so that its love was running along with their blood in their veins, and moving along with their breaths in their lungs. Allah The Almighty favored it with good merits from Him, and virtues out of His bounty. It is, in the world, the best place on earth after Makkah. It was honored by Allah The Almighty. Its merits include the following:

, and his Companions, may Allah be pleased with them. At that time, it was the first and sole incubator that received him when all the Arabs rejected him. The people of Madeenah came to him and were the best host for the best guest. Allah The Almighty aknowledged their favor and clarified in His Book their status, and Madeenah came to be, by the Favor and Grace of Allah, the best spot on earth after Makkah, may Allah guard it.
2-       It is the beloved abode of the Messenger of Allah,

, from among all places, and how could this not be the case when it gave him shelter and its people supported him, and thereupon he loved it and them, and loved its mountains and forts. It was narrated that the Prophet,

, supplicated to his Lord saying: “O Allah, make us love Madeenah as we love Makkah and even more.”[Saheeh Al-Bukhari]About the mountain of Uhud, he said:“This is a mountain which loves us and which we love.” How great is that love which overwhelmed the Messenger of Allah,

, so much so that he expressed it publicly and did not conceal it! He also had a great love for its people, so that he announced it to them saying: “Were all the people to follow a valley, and were the Ansaar to follow another valley or mountain path, surely, I would follow the valley or mountain path of the Ansaar.”
3-       It is sacred with the Sanctity of Allah and His Messenger,

, until the Day of Recompense. It is not like any area on earth, rather it has of honor and sanctity what is similar to that of Makkah. Just as Ibraaheem (Abraham), may Allah exalt his mention, made Makkah a sanctuary, the Messenger of Allah,

, made Madeenah a sanctuary. The Prophet,

, supplicated to his Lord saying: “O Allah, indeed, Ibraaheem made Makkah a sanctuary, and I make a sanctuary the area in between its (Madeenah’s) two rocky mountains.” [Al-Bukhari]
Its two rocky mountains refer to the two Harrah, which are high lands covered with black rocks. Indeed, Madeenah has two mountains in the East and in the West, and it lies between them.
4-       Among the merits of Al-Madeenah An-Nabawiyyah is the existence of the Masjid (Mosque) of the Prophet,

, in it, which is the best of Masjids after Al-Masjid Al-Haraam (the Grand Mosque in Makkah). For this reason, prayer in it is multiplied (in reward). It was narrated on the authority of Abu Hurayrah, may Allah be pleased with him, that the Prophet,

, said: “A single prayer to be offered in this Masjid of mine is better than one thousand prayers to be offered in any other Masjid except for Al-Masjid Al-Haraam.”[Al-Bukhari and Muslim] Among the characteristics of Al-Masjid An-Nabawi is that it is recommended to set out to visit it and offer prayer in it as stated in the following Hadeeth: “None should set out on a journey (for worship) except to three Masjids: Al-Masjid Al-Haraam (in Makkah), the Masjid of the Messenger of Allah

(in Madeenah) and Al-Masjid Al-Aqsa (the Farthest Mosque in Jerusalem).”[Al-Bukhari and Muslim]
5-       Ar-Rawdhah Ash-Shareefah (the Noble Garden), is another merit of which Al-Madeenah An-Nabawiyyah is characteristic. The Prophet,

, said about it that it is one of the gardens of Paradise. He said:“There is, in between my house and pulpit, one of the gardens of Paradise.”[Al-Bukhari and Muslim]
6-       The Masjid of Qubaa’, and this is another of the merits of Madeenah. One of its characteristics is that whoever visits it and offers prayer in it, (the reward he receives for) it is like that of performing ‘Umrah (lesser pilgrimage). In this connection, it was narrated on the authority of Sahl ibn Hunayf, may Allah be pleased with him, that he said that the Messenger of Allah,

, said:“Whoever goes out to that mosque, i.e. the mosque of Qubaa’, and offers a prayer in it, the reward he would get for that is equal to that of ‘Umrah.” [An-Nasaa’i] It was further narrated on the authority of Usayd ibn Thuhayr, may Allah be pleased with him, that the Prophet,

, said: “The reward of a single prayer to be offered in the mosque of Qubaa’ is equal to that of an ‘Umrah.” [Sunan At-Tirmithi]
(To be continued)