Merits of Hajj and ‘Umrah - II 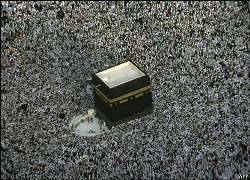 Hajj is (a type of) Jihaad

Jihaad is of different kinds and ranks, including striving with the soul and property, striving with the tongue and word and striving against one’s own desires in obedience of Allah, and this latter type is very clearly manifested in Hajj, which combines the striving of the body along with the spending of wealth in the way of Allah.

Allah The Almighty Prescribed Hajj as a type of Jihaad for he who is weak and unable to fight in the Cause of Allah. It was narrated on the authority of ‘Aa’ishah

that she said, “‘O Messenger of Allah, we see that Jihaad is the best of deeds, should we not take part in Jihaad?’ He said: ‘The best type of Jihaad for you (women) is to perform a Hajj Mabroor.’” [Al-Bukhari]

would not limit themselves to one type of Jihaad. ‘Umar

said, “When you unsaddle (your horses, i.e. return from fighting), then saddle up your camels on your journey to Hajj as it is one of two types of Jihaad.” Ibn Mas‘ood

All of these and other texts indicate the high position of this obligatory duty in the Sharee‘ah of Islam and its importance in the Muslim’s life.

Performing Hajj is among the causes of wealth and its multiplication

One might have the false impression that if he spends his wealth in Hajj and ‘Umrah (minor pilgrimage), his wealth would decrease and he would be given to destitution and poverty. For this reason, the Prophet

wanted to remove this false impression and fear, showing that spending in Hajj and ‘Umrah and performing them repeatedly in fact bring about sustenance and eliminate poverty, by the permission of Allah The Almighty. It was narrated on the authority of ‘Abdullah ibn Mas‘ood

said: "Perform Hajj and ‘Umrah repeatedly, for they remove poverty and sins in the same way as bellows removes the impurities of iron, gold and silver.” [Ahmad and others] Bellows are a tool for producing a strong current of air and are used by blacksmiths to expel impurities and stains from the iron with the help of the fire.

Just as Allah The Almighty promises the slave to recompense him in this world for his spending in Hajj and increase sustenance for him, He also promises that such spending will be multiplied with Him The Almighty in the Hereafter, in the same way as the spending in the way of Allah is multiplied. It was narrated on the authority of Buraydah

said: "Spending in Hajj is (multiplied) like spending in the Cause of Allah: As much as seven hundred times." [Ahmad: Hasan chain of narrators]

The pilgrim is under the protection of Allah

Since Hajj may expose the slave to many risks and terrors which could thwart him and cause him to refrain from performing that obligatory duty, Allah The Almighty ensures for the one who sets out on a journey as a pilgrim to His House in response to His call to safeguard and take care of him in life and after death. As far as this world is concerned, if he returns home, he will return with reward. As for the Hereafter, then if he dies on the journey, he would be raised in the very state in which he died. Which type of fear could then be upon he whom Allah is with? In confirmation of this, it was narrated in an authentic Hadeeth on the authority of Abu Hurayrah

said about a man who fell down from his riding mount while being at ‘Arafah, and broke his neck: “Wash him with water and Sidr and shroud him in two pieces of cloth, and neither perfume him, nor cover his head, for he will be resurrected on the Day of Judgment reciting Talbiyah (i.e. as a pilgrim)." [Al-Bukhari and Muslim]

that he said that the Prophet

said: "The fighter in the Cause of Allah, and the performer of Hajj and ‘Umrah are guests of Allah The Almighty. He invites them and they answer His invitation, and they ask Him and He gives them (what they ask for)." [Ibn Maajah] [Al-Albaani: Saheeh]